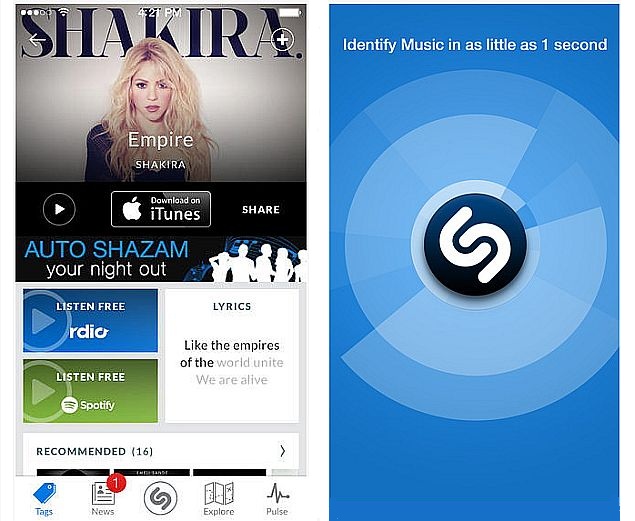 Shazam, the popular music recognition service, will now let users stream and playback those tracks that are 'Shazamed' rather than simply close the app after identifying the song. The identified song can also be added to the Rdio playlist. The updated app is currently available only for iOS, but will be released for Android in the 'next few days'.

Rdio and Shazam have been known to be working as a team for a while, and this update benefits both Shazam users and Rdio subscribers. The new version of the Shazam app flaunts a redesigned play button that will let users stream the full song after the app identifies it.

As for Rdio subscribers, the updated Shazam app would let them access two recently launched features - Your Shazamed Tracks, and the Add to Playlist button. While the Your Shazamed Tracks feature automatically creates a playlist of all the Shazam-identified tracks in the Rdio app, the Add to Playlist button lets users access other Rdio playlists to which they want to add the identified song.

In addition, the Shazam update also comes with an enhanced Facebook sharing feature. The firm also mentioned that the new version comes with more easier options to share and discover songs. The company will add more streaming services in future.

"We are thrilled to be the first streaming music service to power Shazam's new in-app song playback," said Chris Becherer, SVP of Product at Rdio. "This partnership helps us deliver on our promise to be everywhere music is being discovered," he added.

"Shazaming a song is just the beginning of a listener's journey," said Daniel Danker, Chief Product Officer for Shazam. "Now, in partnership with Rdio, fans can listen to the music they discover without even leaving the app, making Shazam a terrific place to enjoy great music."

The updated version of Shazam is only available for iOS users (version 7.7.0) for now via the App Store, and will reach Android users in the next few days.

The update for Shazam comes months after Google's update to its Search app that let it recognise songs and give the results on the spot.