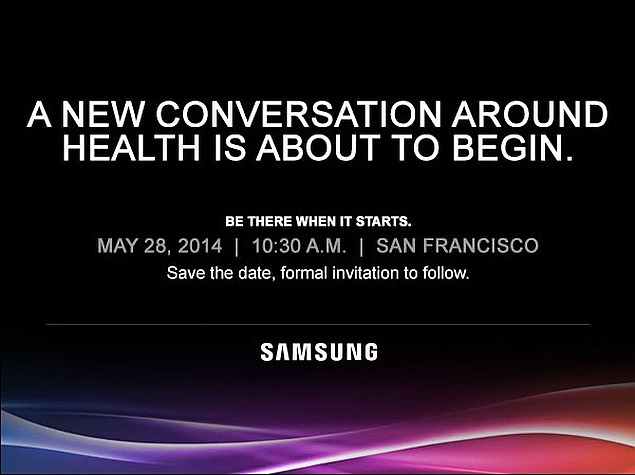 Samsung seems to be trying a new tactic to steal Apple's thunder, by sending invitations for a health-focussed event that's scheduled just days ahead of Apple's Worldwide Developer's Conference 2014.

The invitation (via Engadget) reads 'A new conversation around health is about to begin'. The event is set for May 28 at 10.30am PST at San Francisco.

Samsung is said to be trying to pre-empt the Apple's expected unveiling of its much-anticipated Healthbook app at WWDC. Between the two, Samsung took the first plunge into the health and fitness market, at least in the case of mobiles and wearbles, with the introduction of the heart rate sensor on the Galaxy S5 (Review | Images) and the Gear Fit (Review | Images) fitness-tracker.

Apple is said to be preparing to release the fitness-oriented Healthbook app along with its introduction of iOS 8. As per our previous reports, the app could be a one-stop resource for tracking personal health as well as fitness, nutrition, sleep and exercise.

It has been further speculated that Apple's long-rumoured first wearable device, the iWatch, would tie-in with Healthbook and provide data, or that third-party devices will be allowed to tie-in. This might be the case for heart rate, blood pressure and sleep monitoring, but would still not cover all bases.

Revealed during the MWC 2014 event in February, the Gear Fit comprises of a pedometer, heart rate monitor, and a sleep monitor. Other built-in functions include a fitness app, exercise mode, stopwatch, timer, schedule, smart relay, media controller. Additionally, the users will get active notification alerts for SMS, calls, e-mail and apps on the Gear Fit.

The company also introduced the Galaxy S5 at MWC, with its biggest features the fingerprint scanner on the home button, a heart rate sensor placed near the 16-megapixel camera, and the IP67 certification that makes it dust and water-resistant. The smartphone also features a new design in terms of the back panel now being perforated, and is available with four colours at launch, and optional designer back panels.