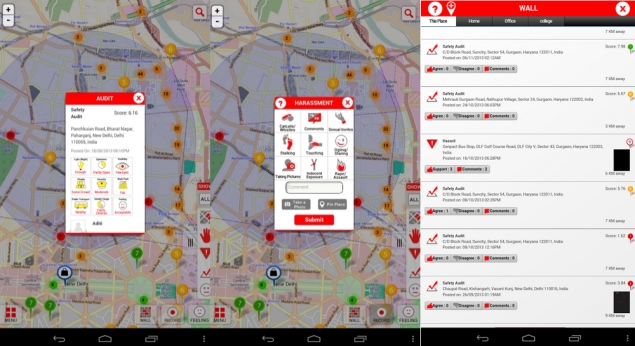 A new mobile application that lets users rate, share information on and discuss the security and safety of their neighbourhood, place of work and markets was launched in Delhi Wednesday.

"Safetipin" is a map-based free application that lets users create circles of interests around their neighbourhood or office or anywhere else in the city.

Any post through the app in any of these circles will show up on a wall tagged for that circle.

"The particular circle can then be audited by the user who can tell others whether a stretch of road or a spot inside that circle has adequate street lighting or public transport or not so that others may avoid that route," said co-founder of the app, Ashish Basu.

"The user can upload pictures and express how he/she is feeling while visiting any part of the city and that information would be shared with the respective circle.

In addition, useful information like the closest pharmacy or police station can also be uploaded by the users.

According to Basu, Safetipin provides a map to its users which shows areas of the city that are unsafe (in red), moderately safe (orange) and safe (green).

"The premise behind Safetipin is that citizen and community involvement in safety will create safer neighbourhoods and cities through reducing tolerance to violence against women," said co-founder Kalpana Viswanath.

The application is available to Android and iPhone users.