While the focus at Mobile World Congress every year tends to be on devices, the event is also a great chance to catch a glimpse of upcoming trends and technologies that are likely to grab headlines over the next couple of years.

Like recent years, Hall 8.1 at MWC was the venue for App Planet, where startups from around the world showcase their latest software solutions, and the three big trends this year were analytics, mobile ads, and chatbots. While the likes of Nokia and Samsung may have been absent from this hall, there was no shortage of journalists and business owners trying to discover the hidden gems to help take their respective stories forward.

Away from the madness of Hall 8.1, a different kind of 'startup' - the world's richest one, perhaps, and one with an Indian connection - Reliance Jio, was showcasing chatbots of its own that could soon find their way to an Android phone near you. At the GSMA Innovation City in Hall 4, Jio was demonstrating four chatbots - JioNews, JioWiki, JioDine, and JioCafe, running inside the Jio4GVoice app - that Jio users will soon be able to interact with to get answers on their general queries, to catch up on news, or to look up restaurants and book a table.

Just like Google Assistant inside the chat app Allo, users can interact with the bots alone, or the bots can be a part of user chats and step in to answer questions.

Like we mentioned earlier, the bots will be available inside the Jio4GVoice app, which is used primarily by users of non-VoLTE phones to enjoy free voice calling and messaging services on the Jio network, over devices like the JioFi. The messaging part of Jio4GVoice is powered by RCS, which can be thought of as the next-generation SMS replacement that offers services like sharing of images, videos, similar to features offered by modern-day messaging apps like WhatsApp. 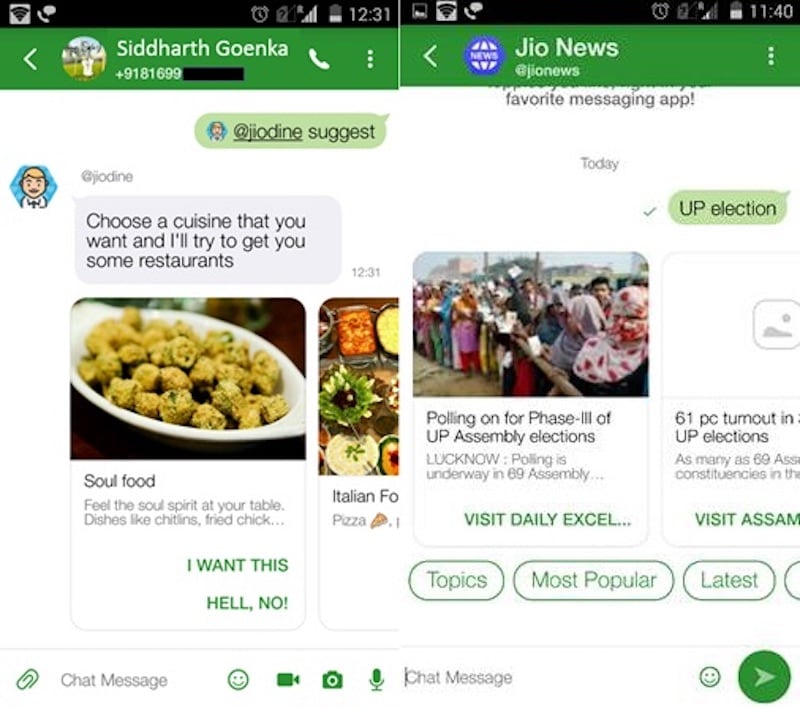 Amir Sarhangi, Head of Product Management – RCS at Google and Mathew Oommen, President Network, Global Strategy and Service Development at Reliance Jio were part of session at MWC last week where Oommen spoke about the potential of bots, in another sign that Jio could announce public availability of its bots soon. Sarhangi talked up the potential of RCS as a platform, while stressing on its backward compatibility.

Google of course has been partnering with telcos around the world to push RCS in place of the archaic SMS format, and it recently revamped its Messages app as well to fully support the RCS standard. In Jio4GVoice, which has over 50 million downloads as per Google Play data, Reliance Jio already has one of the largest - if not the largest - RCS deployments in the world.