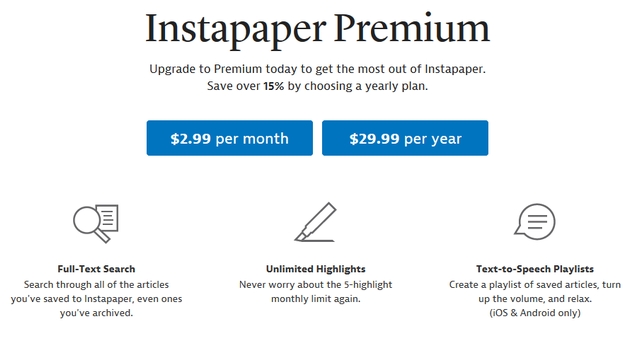 Facing tough competition from apps such as Pocket, read-later app Instapaper now has a fresh look and has gone free. Its iOS app, which used to cost Rs. 190 to Rs. 250 and had an in-app monthly subscription option for Rs. 60, is now available on the App Store for free.

Betaworks, the company that owns Instapaper, announced that the new business model will allow users to buy unlimited access to several features for a fee. On the India App Store, Instapaper users can now pay Rs. 750 per year or Rs. 190 for three months for unlimited highlights, full-text search and text-to-speech playlists.

Instapaper 6 has been updated for iOS 8, which means that you can now save articles directly from Safari. This is an improvement over the previous version, where one had to copy links and paste them in Instapaper or email it to their queue to save articles. That was a limitation imposed by iOS. The new version also has a notification centre widget that shows you articles you've saved today.

Apart from iOS 8 features, Instapaper 6 adds text-to-speech support. This means that you can now listen to articles saved in Instapaper if you don't have the time to read them. To create playlists for these articles, you will have to buy the in-app subscription.

Instapaper is also available on Android and the Web.
Comments