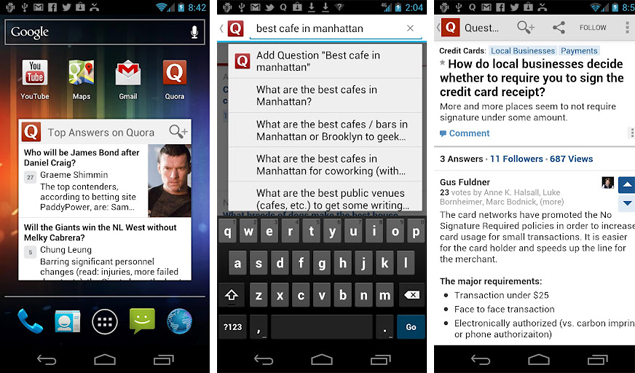 Quora, the question-answer website that "connects you to everything you want to know about", has launched Quora for Android. The native Android app brings core features of its web counterpart to Android phones and tablets.

Mobile now accounts for over 25 percent of Quora's traffic, which led the company to launch the Android version. Folks behind the app's development said, "When we set out to build an Android app, we wanted to take advantage of the unique characteristics of the Android platform to extend your experience of Quora in new ways. Our app was built and designed for Android from the ground up, and follows modern Android design principles so it looks and feels great, even on older devices and platforms."

Quora for Android comes with integrated voice search, widget support for the homes-creen and the ability to use the app in landscape mode. The landscape mode of the app allows for a more comfortable reading experience for Android tablet users. 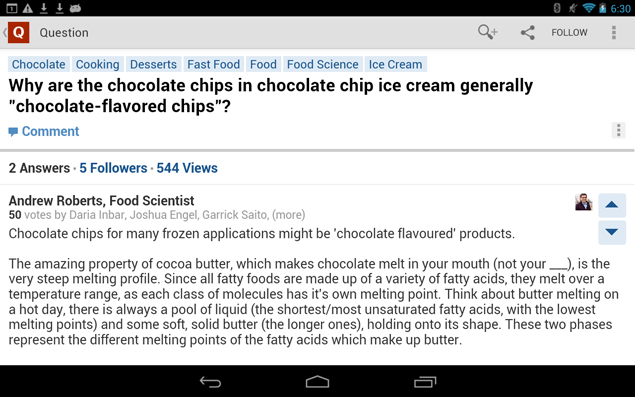 With the app's results integrated into the device's search, you can search Quora even when you're not inside the app. In addition to this, you can access search on every screen within the app. Android's built-in voice recognition capabilities make it easy to ask a new question by just tapping the microphone icon and speaking aloud.

The Top Answers on Quora is a widget that can be added to the home-screen which is customisable by size. You can experience Quora's content just by glancing at your home-screen when you like.

The team behind the app's development claim to have improved upon its performance based on answers posted from mobile devices. Now you can insert images straight from your device camera into question details, answers and comments, a first for the service on a mobile platform.

The iOS version of Quora launched last September. A recent update of the app restricts it to iOS 5.0 and later only. The app also received visual enhancements with regards to a new icon and its navigation bar. Facebook integration was also improved so that clicks on Quora stories in the Facebook app open the corresponding page in the Quora app. The Android voice-based search option is missing in the iOS version.

Quora for Android is now available for download from the Google Play Store and the Amazon Appstore.
Affiliate links may be automatically generated - see our ethics statement for details.
Comments