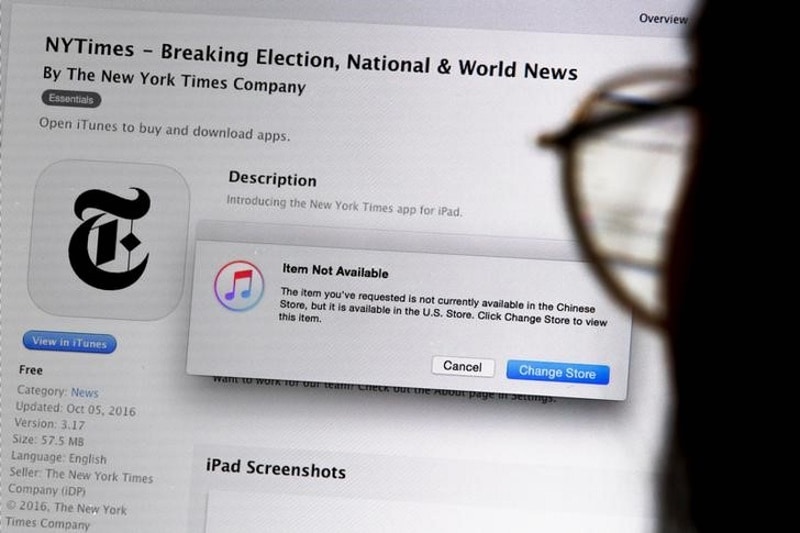 Apple has removed the New York Times app from its digital store in China, acting on what it says were orders from the Chinese government.

But the fact that the move was made on the same day a New York Times reporter contacted Apple about a potentially embarrassing story for the California-based company - as well as the fact that other international news apps were unaffected - has raised doubts about the precise motives behind the action.

The New York Times, which offers content in both English and Chinese, is one of a growing number of foreign news organizations whose content is blocked in China, although some people here use special software to bypass the censorship system.

The Times said the app had been removed from Apple stores on December 23, apparently under regulations issued last June preventing mobile apps from engaging in activities that endanger national security or disrupt social order.

But that was the same day that New York Times reporter, David Barboza, first contacted Apple for comment on a story about billions of dollars in hidden perks and subsidies the Chinese government provides to the world's largest iPhone factory, run by Apple's partner Foxconn. That story went online on Dec. 29.

GreatFire.org, an anti-censorship group, worked with the New York Times to launch a version of its Chinese-language app in July that circumvented Chinese censorship in ways the government could not easily prevent.

It pointed out that its Chinese-language Android app continues to work unobstructed in China, while its own own FreeWeibo app had earlier also been removed from the Apple store. It tweeted that, its opinion, the censorship was related to the Times piece about subsidies for Foxconn.

Even if the timing was merely a coincidence, the news underlines how American information technology companies are being forced to play by China's rules if they want to do business here - even at some cost to their reputation in the West.

It is also another example of how the noose is gradually tightening under the world's largest system of censorship known as the Great Firewall of China.

But it also comes as China redoubles its own efforts to spread the Communist Party's message far and wide across the world, including in the United States.

The latest move throws up another barrier for Chinese readers, especially new customers. The app is available in Apple stores in Hong Kong and Taiwan, for example, but users need a credit card billing address outside mainland China to download it, the Times reported.

"For some time now the New York Times app has not been permitted to display content to most users in China and we have been informed that the app is in violation of local regulations," Apple spokesman Fred Sainz told the Times. "As a result, the app must be taken down off the China App Store. When this situation changes, the App Store will once again offer the New York Times app for download in China."

The Washington Post's website is not blocked in China, and its English-language app is available on the Apple store, but many other news organizations are blocked.

The Times said it had asked Apple to reconsider its decision. Criticism also rained down online.

As my colleagues Emily Rauhala and Elizabeth Dwoskin reported last month, California's Internet companies may have once dreamed of liberating China through technology, but these days they seem more willing than ever to play the Communist Party's game; case in point, news that Facebook is developing a censorship tool that many interpreted as an attempt to get its service unblocked here.

The news of the Times' app being blocked was not reported by Chinese media, but filtered through to a few Netizens.

"We are closing our doors to the outside world," lamented one user of Weibo, China's equivalent of Twitter. "This is a restoration of the Cultural Revolution or another historical retrogression," said another.

The Washington Post is one of many Western newspapers that carries a regular paid supplement by China Daily, another Communist Party mouthpiece.