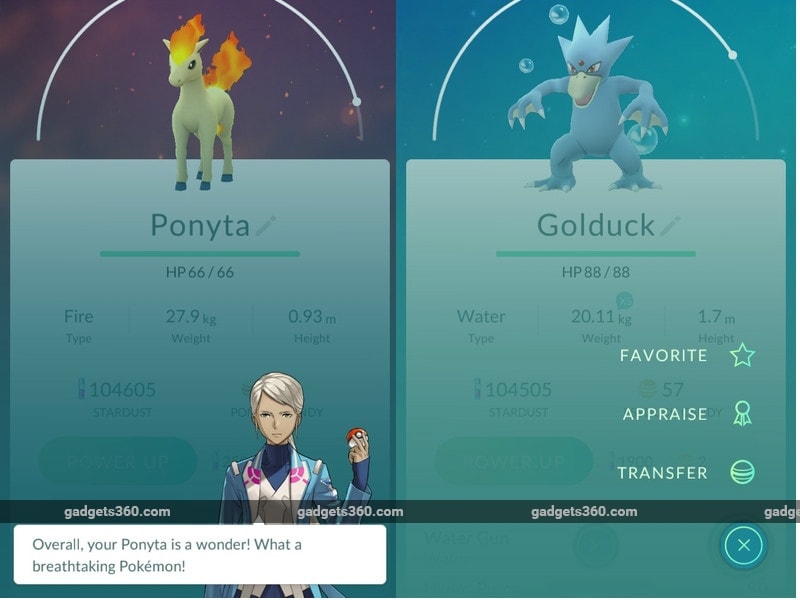 Pokemon Go just got an update on Android and iOS that adds a neat feature if you are into a lot of gym battles. The feature is called Appraisal and it lets you know your Pokemon's best attributes.

If you're thinking that Combat Power (CP), attack, and hit points (HP) stats already tell you that, then you're mistaken. Each Pokemon has three hidden individual values (IVs) - Attack, Defence, and Stamina. These determine whether your Pokemon are best used to attack gyms or defend them.

To access the new Appraisal feature, open the game, tap the Pokeball, tap Pokemon, and then tap on any of your Pokemon. After this, tap the three lines button on the bottom-right and tap Appraisal. Your team leader will appear on screen and say a few things about the Pokemon. If you can't understand what the leader is saying, head to the excellent Gamepress Appraisal page or check out this image on Reddit and you'll have a better idea of how good or bad your Pokemon are.

IVs are determined on a scale of 15, and the game still doesn't tell you these values. However, the Gamepress page linked above should help you determine your Pokemon's IVs. There is the rare chance that some of your Pokemon have perfect IVs (15 for attack, defence, and stamina). If you've hatched Pokemon from eggs, check out this chart on Reddit to see if the Pokemon has perfect IVs. You should look at powering up or evolve these Pokemon, rather than wasting resources on weaker ones.

The other change in the latest Pokemon Go update is that when you train Pokemon, they now "faint" if they lose a battle. This means that their HP reduces to 0 and you need to use a Revive to send them into battle again. Previously a bug in the game left defeated Pokemon with 1 HP, which means you had to use Potions to heal them. Revive only works on Pokemon with 0 HP. In the release notes, Niantic promised that it's working on rebalancing training battles.

Do you like these new features? Let us know via the comments.