iPhone app to replace the stethoscope? 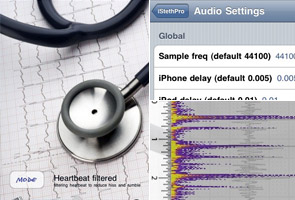 Highlights
The iPhone could soon replace the doctors' best friend, the traditional stethoscope, thanks to a free application created by a University College London researcher.

Peter Bentley invented the 'iStethoscope' application which monitors heartbeat through sensors in the iPhone as just a bit of fun. And, more than three million doctors across the world are signing up for the free application.

"Everybody is very excited about the potential of the adoption of mobile phone technology into the medical workplace, and rightly so. Smartphones are incredibly powerful devices packed full of sensors, cameras, high-quality microphones with amazing displays.

"They are capable of saving lives, saving money and improving healthcare in a dramatic fashion, and we carry these massively powerful computers in our pockets," the British media quoted Bentley as saying.

While he said that he had originally invented it as a fun toy, experts in the medical field have said the software is a major advance in medical technology which has saved lives and enabled doctors in remote areas to access expertise.

In fact, in the future, it could be possible for people to conduct their own ultrasounds or monitor blood pressure through smartphones, say the experts.
Comments