Paytm App Gets a Security Layer to Keep Your Wallet Safe

After the demonetisation of Rs. 500 and Rs. 1000 notes, wallet companies have been seeing a huge surge in signups, and a number of people have started to worry about the security of these apps. Paytm announced on Thursday that it has launched a new security measure that allows you to add a lock on all transactions from your wallet. This Paytm security feature is only for Android users at present - though fingerprint security is coming soon for iOS, the company confirmed.

Earlier, anyone who had access to your phone could use the Paytm app to make payments - this new measure ensures that you need to be able to access not just the phone but also gives a secondary layer of security for the Paytm app. Although the security feature is optional, the way Paytm has implemented it, the default option is to add the extra security, which is a welcome move.

This Paytm security feature uses Android's authorisation mechanism, and so it will only work on a phone that has a screen lock - it can be a PIN, password, pattern, or fingerprint - which is something we'd strongly urge all readers to enable anyway.

When you start the (updated) Paytm Android app and tap on the Pay, or Passbook, buttons, an advisory pops up informing you of the new security feature. Tap Add Security Feature to get started with the Paytm security feature, and confirm your PIN or pattern or password. Once you do that, a pop-up will tell you that you've enabled additional security on the Paytm app, which can be disabled from the settings in the Profile menu. 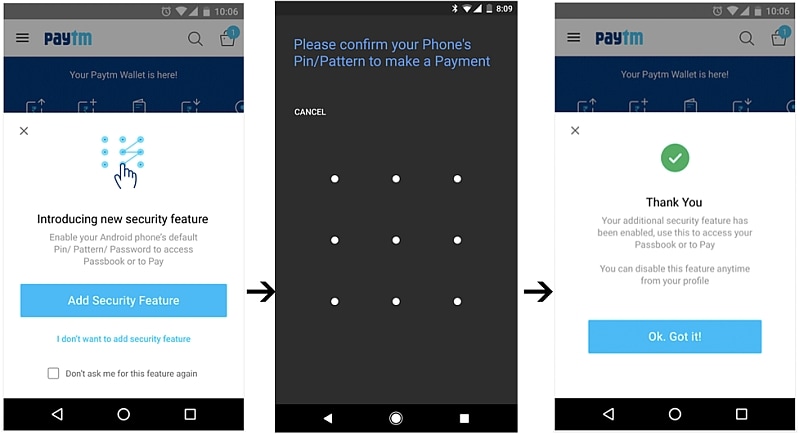 After enabling additional Paytm security, you can try and make a payment, or read the Passbook, at which time you'll have to enter your PIN or pattern or password, or Privacy Protection Password, if you've set that up under the Lock Screen settings in your Android settings.

Setting up Paytm security feature took less than a few seconds, and it worked seamlessly - and since you're inputting the password on your own device (it's not being checked on Paytm's server but by the Android system on your phone), there's no lag or delay - it's pretty much instantaneous in use.

With the deposit limit in wallets being extended to Rs. 20,000 even without KYC and the sudden uptake in the number of people who are using mobile wallets such as Paytm's for the first time, it's a welcome move to add a security measure like this, and one we hope that all wallets will adopt as an optional feature.

Further reading: Paytm, Mobile Wallet, Security, Wallet security, Digital Money, paytm wallet
Gopal Sathe Email Gopal Gopal Sathe is the Editor of Gadgets 360. He has covered technology for 15 years. He has written about data use and privacy, and its use in politics. He has also written extensively about the latest devices, video games, and startups in India. Write to gopal@ndtv.com or get in touch on Twitter through his handle @gopalsathe with tips. More
Alcatel Idol 4 With VR Headset Launched in India at Rs. 16,999: Release Date, Specifications, and More
Samsung Galaxy S7 Edge Blue Coral Variant Now Available in India; Black Pearl Colour Variant Launched