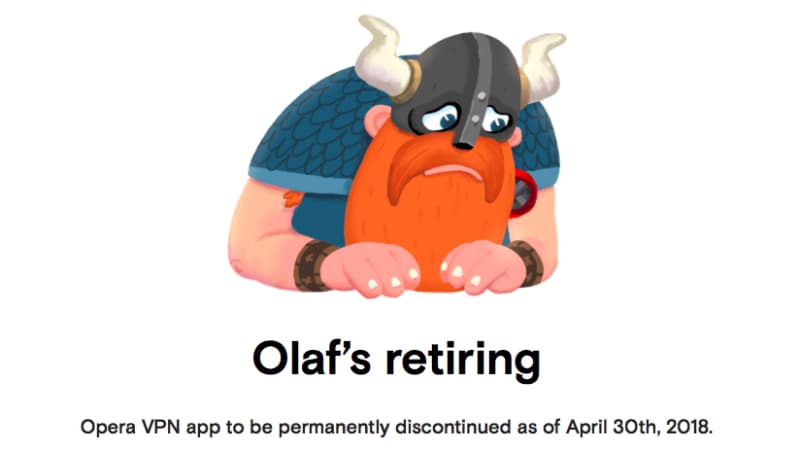 Software giant Opera recently announced that it would be discontinuing its Opera VPN app on both iOS and Android with effect from April 30, 2018. All paying Opera Gold users will be provided with the option to redeem a free one-year subscription for SurfEasy Ultra VPN. Additionally, the company announced that Opera users not on the Opera Gold plan will be eligible for an 80 percent discount on subscription of SurfEasy Total VPN.

SurfEasy currently has three pricing plans: the starter pack is free and provides the user with 500MB free data and support for 5 devices, Total pack is currently available at $3.99 (roughly Rs. 262) per month with unlimited data, tracker blocking, and support for 5 devices. And, finally, Ultra pack is currently priced at $6.49 (roughly Rs. 426) per month with features similar to the ones in Total pack alongside additional ones including torrent protection and 12 additional countries.

According to Opera, SurfEasy Ultra offers unlimited VPN usage on up to five devices at a time, access to a total of 500 servers in 28 regions, and a strict no-log policy. Apart from that, SurfEasy is supported on five platforms - including Windows, Mac, Android, iOS, and even Amazon devices. It also has extensions on Chrome and Opera browsers. For Opera Gold users on iOS, migration to SurfEasy is possible from within the latest version of the Opera VPN app.

"All of us here at Opera VPN (including Olaf) are sincerely grateful for all your support over the last couple of years, and we're sorry for any inconvenience this may cause. We know you'll be happy at SurfEasy, and we know SurfEasy will work hard to look after your online privacy," said Opera in a press statement.

SurfEasy is a North American VPN service that was acquired by Opera back in early 2015. SurfEasy currently claims to offer a 99.99 percent uptime guarantee. SurfEasy also has an advanced tracker blocker that claims to block cookies used by advertisers online.

Android Oreo Distribution Reaches 4.6 Percent in April, Nougat Still Dominates at 30.8 Percent
PUBG Mods May Not Be Allowed Due to 'Security and Privacy Aspects': Brendan Greene