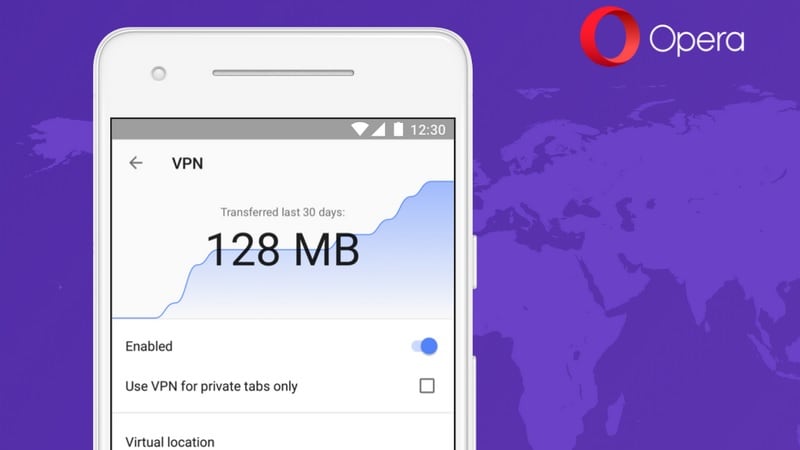 The VPN is apparently being rolled out in a phased manner

The Opera browser beta for Android now comes with a free VPN that is integrated into the app. Opera has announced that it has begun testing a new built-in browser VPN in the Opera beta app for Android. The new VPN is being gradually rolled out to beta testers across the world and it is completely free without any log management and as has no usage cap either. As we mentioned, the free VPN in Opera browser beta is being rolled out in a phased manner and not all users can currently access the VPN tool in the app.

Opera claims it is offering the free VPN to users in order to give them an extra layer of protection when it comes to browsing the Internet and prevent them from snooping. Opera's VPN is a no-log offering that means the information travelling through the virtual IP and the network servers is not collected, ensuring that privacy and security of users' data are not jeopardised when they are connected to a public network.

However, this is not the first time that the Opera browser for Android is offering a VPN service. Opera originally launched a free and unlimited VPN for Android back in 2016 that offered features such as ad-tracker blocking and Wi-Fi security test among others. But later in 2018, Opera discontinued the VPN despite the tool having become quite popular among users. Opera is now looking to fill the void with a new integrated VPN in the Opera browser beta for Android that is now available to download from the Play Store.

As for Opera's new VPN in the beta app, it allows users to choose between the Europe, America and Asia servers. Alternatively, one can choose the ‘Optimal Mode' in VPN settings that automatically selects the best network route depending on the users' current location. One can also selectively deactivate the VPN to let search engines bring up the most relevant search results depending upon the location of users. There is also an option to exclusively activate the in-built VPN for anonymous surfing that can be done by launching a private tab. Opera's built-in VPN is certainly a feature that users will appreciate and more importantly, they don't have to worry about the perils associated with using a free VPN from a lesser-known brand.