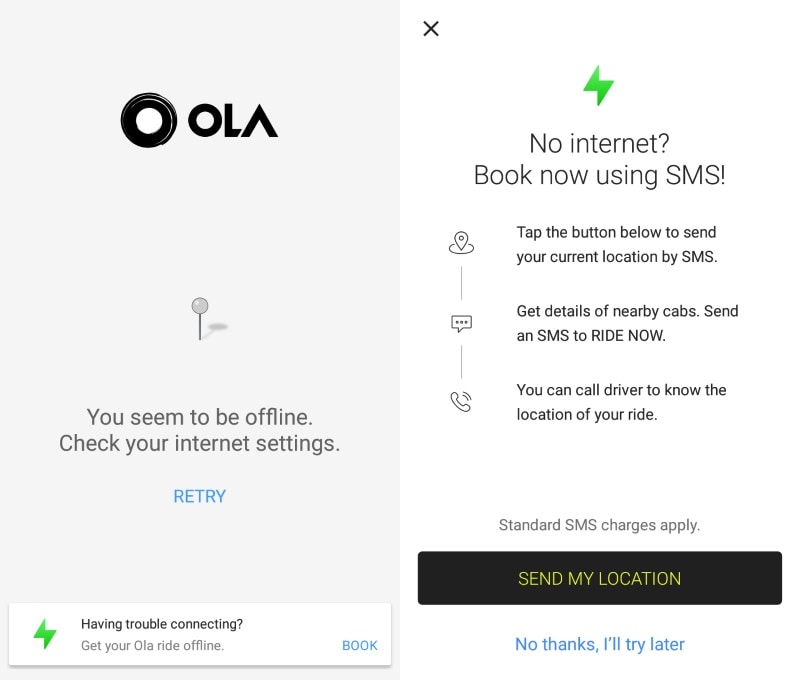 Booking a cab via an app has become the norm for most of us, but what do you do if there's no data connectivity where you're waiting? Ola has an answer to that question, and on Monday sent out an email to its users to introduce Offline Booking. As per Ola's emailed statement, if the app detects that you are offline it will prompt you to send your location via SMS to Ola, which will then send you driver details over SMS - you can then contact the driver via a phone call, just as you normally would.

In August, global rival Uber had launched a feature called Dial an Uber, which allowed you to book a cab without having to download the Uber app, but that still did not work offline - merely asked you to visit a website and enter your details. In other words, it was a good fit for the problem of low-end phones without storage to spare, but not really useful if there was no connectivity.

In contrast, Ola's feature works fully offline - we tested the app with data switched off and the process worked very smoothly. You'll have to send a couple of SMSes to carry this out, which you will be charged for, but if you're stuck somewhere with poor connectivity, that won't really be a deterrent for most people.

This works based on your registered mobile number, so it uses that information for your billing. There are no other additional charges, and you can pay by cash if you prefer, though if you have Ola Money, that will be deducted. Once you get back to a network, the app resumes normal operation.

The two apps have taken a very different approach to connecting users without relying on their apps. Dial an Uber is designed to allow anyone with a data connection to call an Uber, regardless of whether they have the app or not. This will no doubt be useful in reaching out to users who don't have lots of space on their phones, and thus prefer not to have too many apps installed. Once you've visited the website, the rest of the transaction moves forward on phone calls, hence the name.

On the other hand, Ola's Offline Booking is not trying to tap new users - instead, it's aimed at improving the experience for its existing customers. Irregular network coverage remains a big issue throughout even the major cities of India - it's not uncommon to go from 4G to 2G to no-G in just a few minutes. There are situations where the connection is there, but the speed is so low that you can't book a cab anyway. Now, you could just turn off mobile data and still be able to book a taxi when you need it.

Both companies' features are useful, and we wouldn't be surprised if they 'inspire' the other to develop a similar feature