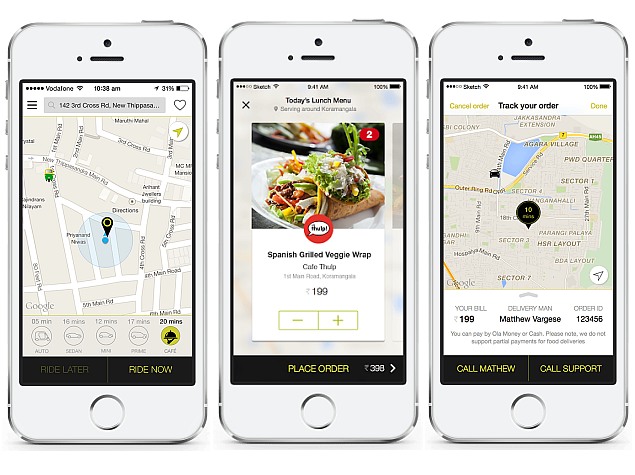 Taxi aggregator Ola has marked its entry into the food delivery space with the launch of 'Ola Cafe.' The service is initially available in Mumbai, with plans to expand to Delhi, Hyderabad, and Bengaluru.

Ola's move comes on the heels of the recently announced acquisition of competitor TaxiForSure for $200 million (approximately Rs. 1240 crores), marking the first hint of consolidation in the crowded space of ride-hailing apps and services in India. Ola is competing with other local players like Meru and international giant Uber, to get a dominant slice of the burgeoning market.

The sector has been in the news for all the wrong reasons in recent times, with Delhi government asking Uber, Ola, and some other players to halt operations after an alleged rape by an Uber driver in the nation's capital. The companies were later allowed to resume services after agreeing to install emergency buttons in their cabs and have tracking devices as per the new regulations.

Uber has been operating food delivery services in the US since last year under the name Uber Fresh. Uber did something similar recently outside US, when it re-emerged in Spain as a home food delivery network after a court banned it from operating its taxi service following complaints from professional drivers.

For its delivery service, Ola has tied up with select restaurants to offer delivery 'within 20 minutes' during certain times of the day, with the service available in very limited regions across the launch cities. More details are available on Ola's website.