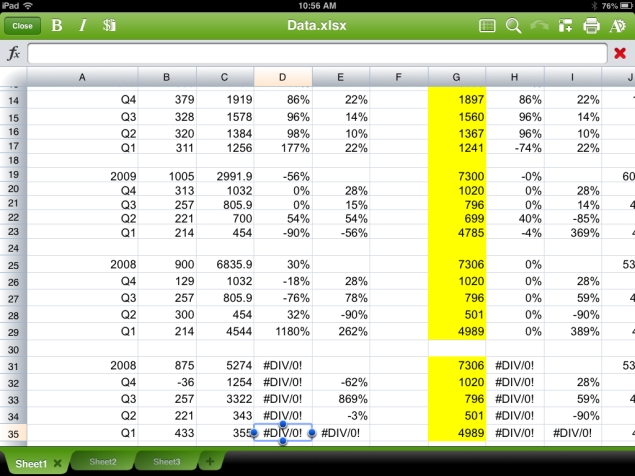 There's nothing I like more than getting some writing done at my favorite neighborhood coffeehouse. It's relaxing, I'm more productive and the place makes a great cappuccino.

But after I bought my iPad about a year ago, I didn't want to go back to schlepping around my laptop, which suddenly seemed so heavy and clunky by comparison.

We all know that tablets are great for watching online videos of frolicking kittens, updating your Facebook status and checking email. But can they really substitute for a laptop when it comes to doing actual work?

To find out, I downloaded software for using word processing and spreadsheets on mobile devices. One works with just iPhones and iPads, while another works with devices running Google's Android system as well. I also test drove an upcoming update to Microsoft Office, one designed to seamlessly link work on PCs, tablets and smartphones.

All of the programs store and access files over the Internet rather than the individual devices. That approach can be pretty handy once you get the hang of it.

Unfortunately, the programs also all involve, well, typing on a tablet. That can be downright painful after a while.

Here's my experience with the three programs

Quickoffice
This program is designed to make Apple and Android mobile devices compatible with Office even if the software isn't installed on them. While Microsoft does have a Web-based application that can be accessed on an iPad, it doesn't make a downloadable app for the device yet. Google Inc. bought Quickoffice this summer as part of its attempts to siphon sales away from Microsoft Corp.

The $20 app includes programs similar to Microsoft's Word for documents, Excel for spreadsheets and PowerPoint for presentations. But the programs have some shortcomings and don't mesh perfectly with the Microsoft versions.

For instance, Quickword, the word processing program, doesn't include a spellcheck feature. Rather, it has an autocorrect function similar to those in phone email and messaging programs. While autocorrect is nice, it's not always enough.

When I tried to open a copy of my resume, the margins didn't line up the same way they did in the original copy on my PC, even when I shrunk the document down to fit on the page. Other documents opened just fine.

That said, a file created on Quickword opened nicely on a PC.

There are a variety of ways to transfer files. You can make transfers through a website, use a variety of document-sharing programs such as Google Drive or Dropbox, or sync your device with your desktop computer through iTunes.

The easiest way was simply to email documents to myself.

iWork
Apple has its own suite of Office-like tablet apps: Pages, for word processing, Numbers, for spreadsheets, and Keynote, for presentations. They cost $10 each, or $30 for the set, making iWork pricier than Quickoffice. But you can buy just one or two of the programs.

The Apple apps also will show up on your iPhone, assuming you want them to, for no extra charge. Quickoffice costs $15 for a separate phone version.

The Apple software is simple, attractively styled and friendly to use.

Pages offers a handy bar at the top that lets you control the size and font of text. There's also a nifty tool in one corner for you to import photos directly from your iPad albums. Photos can be moved, resized and rotated by pinching and twisting your fingers.

For those not adept at page design, the program has 16 templates such as resumes, recipe cards and term papers. And, perhaps most importantly, there's a traditional spellchecker besides autocorrect.

What's different is Pages gives you the option of saving your document in the Word format, as a Pages file or as a PDF. Word and PDF versions of Pages-created documents opened easily on my PC. But as expected, the Pages version wasn't compatible (it is with the Pages program on the Mac).

When I made minor changes on my PC and sent them back to my iPad, Pages altered some of my fonts. But the changes were entirely cosmetic.

Both Quickoffice and Pages had a prominent "undo" button, which came in very handy given the error-prone nature of working on a tablet. There were several times chunks of text got deleted or photos got distorted because of my clumsiness. The "undo" buttons came to the rescue.

Microsoft Office
Working with Microsoft Office on a tablet is much like working with it on a desktop. As a result, there's less of a learning curve than with Quickoffice or iWork. Unfortunately, Microsoft makes it only for devices running Windows not for iPads, iPhones or Android devices.

Microsoft hasn't announced a release date for the new version of Office yet, but a subscription for the home version is expected to cost $100 per year and will cover up to five computers and tablets. A small business version will go for $150 per year. Consumers and businesses can also buy the software to install on one computer for $140 to $400, depending on the version.

Microsoft Word comes with a host of handy document templates. Within the program, toolbars at the top let you change fonts, insert photos and do all of the stuff you have come to expect from Word.

For sharing documents or getting them back to your PC, Microsoft offers SkyDrive, its own Internet-based storage system. Documents also can be sent by email through Microsoft Outlook, which is part of the Office suite.

Microsoft's version of Office for the tablet seems best suited for business users who crave seamless connections between their computer and on-the-go tablet.

My husband, who frequently works from home and the road, loved it and said he would be happy if his company started using it. He found the tablet's version of Excel to be quick and easy to use.

I borrowed a Samsung tablet running the upcoming Windows 8 operating software, which comes out Oct. 26. It is a few inches wider than the iPad, giving my husband a much broader view of the spreadsheet he was working on. He also liked SkyDrive's global access and the tablet's version of Microsoft Outlook.

But a casual user who just wants to write a letter or balance a checkbook might not find it as enticing.

Since its inception, the iPad has dominated the tablet market with its easy-to-use setup and minimalist design. It's light and easy to throw into a briefcase or a diaper bag.

The Samsung tablet, though beautiful in many ways, is significantly heavier and has a laptop-like power cord that's bulky compared with the iPad's. There will be other Windows 8 tablets out, including Microsoft's own Surface, but even that will be slightly heavier than the iPad, partly because of its larger screen. That might not be an issue for business types who haul around their work in a rolling briefcase, but it was for me.

Basically, what it boils down to is your needs.

If you're serious about replacing your laptop with a tablet, regardless of what brand, you probably want to invest in a good external keyboard. With both the Apple and Samsung tablets, typing was very awkward, whether I laid them flat, or propped them up at an angle.

For the same reasons, I'm not sure how useful the phone versions of the apps would be. My 63-year-old father, who wears reading glasses, tried to use Quickoffice's spreadsheet program to view documents on his Android phone. But he eventually gave it up because the phone's screen was too small to make it effective.

All three programs do an adequate job of letting you do work on your tablet. Microsoft's does the best job of mimicking what I'm used to on the desktop, but it's also the least useful for iPad owners. If you're sticking with the iPad, it's probably best to pick and choose the apps you need from iWork, which offers more features for the money than Quickoffice.

Whatever you decide, don't expect to shelve your laptop in favor of a tablet or phone anytime soon. These programs fill in a gap, but are far from replacements.