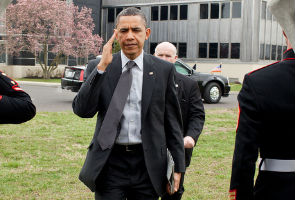 Highlights
President Barack Obama, hoping to spur U.S. innovation in the explosive field of mobile communications, on Wednesday ordered all major federal agencies to make many more of their services available on mobile phones within the next year.

"Americans deserve a government that works for them anytime, anywhere, and on any device," Obama said in a statement.

His administration is eager to hasten government adoption of new technology since showing itself to be highly tech-savvy after running a 2008 election campaign that was widely praised for the innovative way it used the Internet and social media.

Analysts welcomed the move, but voiced scepticism it could be effective unless Obama also freed up more government broadband spectrum to the private sector.

The presidential order tells each agency to make at least two services relied upon by the public available on mobile phones within 12 months.

What this means in practical terms is a massive expansion in public access to government data, from healthcare and education to energy and public safety, which the administration hopes will boost jobs by encouraging innovation.

But public interest group Free Press said what was really needed from Obama were communication laws and competition policies that make broadband more accessible to everyone.

"Government's most important role in this space is not as a content creator," said Free Press policy director Matt Wood.

Digital strategy
The Obama administration also released a new digital strategy on Wednesday that it said would drive a more efficient and coordinated delivery of federal services on mobile devices.

This will require agencies to set up websites to provide online resources for outside developers, and make government information open and machine-readable by default.

"The initiatives we're launching today will make government data resources even more accessible to the public and to entrepreneurs who can turn these data into services," said U.S. Chief Technology Officer Todd Park.

Analysts said Obama's directive was a logical step to move government further into the digital world.

"But it also could end up putting more pressure on him to move more government spectrum into the market to support wireless broadband," said Guggenheim Securities analyst Paul Gallant.

In 2010, the administration said it would make 500 megahertz of spectrum available in the next 10 years for broadband.

The growing use of wireless devices like Apple Inc's iPad tablet and Google Inc's suite of Android-powered smartphones has added to the urgency to find more space on the airwaves.

Mobile Future's Spalter said he was troubled that the 27-page strategy memorandum did not once mention spectrum.

The Federal Communications Commission said earlier in the month it was ready to work with the National Telecommunications and Information Administration (NTIA), which manages government spectrum, to gauge if it was feasible for government users to share the same spectrum with commercial wireless operators.

U.S. Chief Information Officer Steven VanRoekel said on a call with reporters that freeing government airwaves for use by commercial wireless providers is a conversation the White House wants to have with the FCC, NTIA and the Commerce Department.

"America as a country is going to be faced with a spectrum crunch, and we need to really look at opportunities there," VanRoekel said.

Medley Global Advisors analyst Jeffrey Silva said the sweeping government shift to mobile apps may serve as a tacit heads-up to federal agencies that the administration eyes mobile broadband as the future of the Internet.

"Still, the power of the presidency and Obama's use of the bully pulpit do not guarantee that a significant amount of additional spectrum will be returned by the Pentagon and other federal departments anytime in the near future," Silva said. "It will be trench warfare."