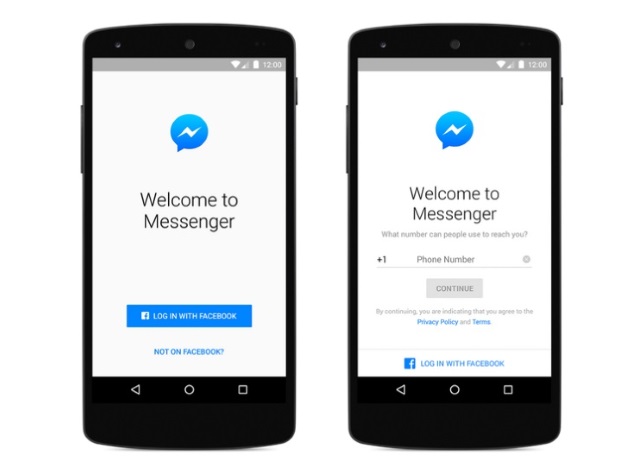 Facebook Inc has enabled users without an account to sign up for its Messenger app with a phone number, the social media company said on Wednesday, in another move to broaden the app's reach and make it a standalone platform.

Earlier this year, Facebook opened up Messenger to developers, and Chief Executive Officer Mark Zuckerberg said he wanted to connect users directly with retailers, restaurants and other businesses.

With the latest update, users will be prompted by an option that says "Not on Facebook?" when they open the app. They can then sign up with their name, phone number and a photo.

The mobile messaging service, which has 600 million users, has added a number of new features in recent months, including games and video calling.

The new sign-up method is rolling out first in Canada, the United States, Peru, and Venezuela. The company announced the news on its blog post.

With this update, more people can enjoy all the features that are available on Messenger - including photos, videos, group chats, voice and video calling, stickers and more. All you need is a phone number.

For those who have Facebook accounts, there are many benefits to using your Facebook credentials when signing up for Messenger. People can easily message with their Facebook friends and contacts, access their Facebook messages and take advantage of multi-device messaging across mobile devices, the web and tablets.