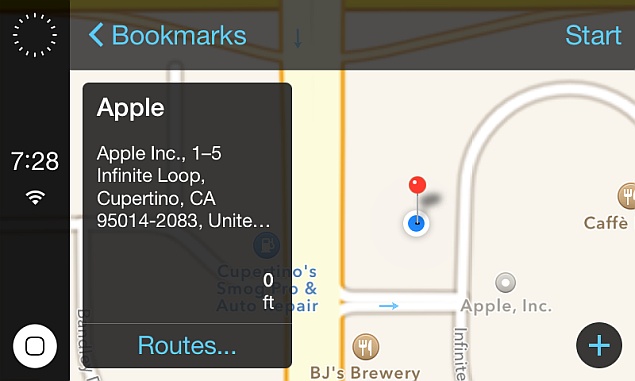 One of the most talked about and anticipated new directions for the Apple iOS ecosystem is the proposed integrated 'iOS in the car' feature which would let the drivers talk to Siri, listen and respond to messages, use maps and work on other things while driving.

The feature was earlier rumoured to arrive with the release of iOS 7 at the last Worldwide Developers Conference (WWDC), held back in June 2013. However, the rumours again indicate the feature to finally arrive with the upcoming iOS 7.1, which is currently under beta testing.

Some screenshots have been also picked up from SteveTroughton's, one of the developers, Twitter post. The screenshots show us how the upcoming interface of "iOS in the car" feature might look (Apple may change it before final launch).

In one of the screenshots of the 'iOS in the car' UI show a left-aligned bar showing time, connectivity status and a traditional home button icon, which can be seen in other screenshots as well. The graphics, fonts and buttons seem similar to that seen in iOS 7. Other screenshots show a road safety warning screen, and an app menu for now showing only the Maps app icon.

It has been also understood that a number of car makers are interested in integrating this feature in their automobiles in 2014. Some of the car makers mentioned by Ars Technica are Acura, Chevy, Ferrari, Honda, Hyundai, Infiniti, Jaguar, Kia, Mercedes-Benz, Nissan, and Opel.

As a rival, Google's Android is also pairing up with General Motors. The firm is said to pair itself with the mobile OS via its native OnStar communications technology. Google has also entered into a partnership with the leading carmakers and a chip-making firm in order to bring its Android operating system into vehicles in 2014. Open Auto Alliance (OAA), an auto-tech group, also announced on Monday, the opening day for CES 2014, that they will support the OS' widespread use with certain tweaks.