The Smart Downloads feature was launched for Android last year

Netflix has finally brought the Smart Downloads feature to the app's iOS version, after originally launching it for the Android app back in July last year. The Smart Downloads feature is now live on the Netflix app for iOS and we can verify the same. The download management feature is aimed at reducing the hassle while managing content downloads, as it automatically queues up a new episode for offline viewing when users are finished watching an older one in the series.

The Smart Downloads feature only works when users are connected to a Wi-Fi network, which means one does not have to worry about accidentally finishing up their mobile data after downloading content from Netflix. As for how the feature actually works, well, it will identify the series and the episodes users are watching and then decides when to activate the automatic download action. Take for example users have downloaded the first three episodes of a series. Once they are done watching the first episode, the Smart Downloads feature automatically starts downloading the fourth episode.

More importantly, the Smart Downloads feature deletes the first episode after it has been watched before the fourth episode is lined up for downloading, making sure that users don't run out of storage space. But do keep in mind that if you are into binge-watching a TV series and want to watch it again in one go, the Smart Downloads feature is not for you, primarily because it automatically deletes a previously watched episode to free up space. However, one can always choose to enable or disable it to better suit their content consumption habits.

The ‘Smart Downloads' feature works the same way on the Netflix app for iPad and iPhone, and can be activated or deactivated in two manners. Here is how you can do it:

Method 1: From the App Settings 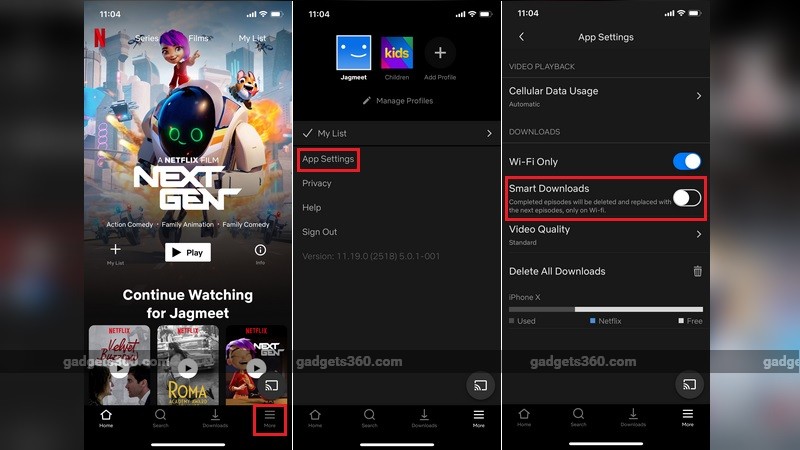 Netflix claims that it wants users to spend less time managing their downloads and spend more time actually consuming content, something the Smart Downloads feature will help them accomplish.