The NDTV HD app is the best way to experience the latest news from NDTV.com on an iPad. The app features latest stories from the world of politics, business, entertainment, sports, technology and more. In addition, users can tune in to NDTV's various channels (NDTV 24x7, NDTV India, NDTV Profit, NDTV Good Times and NDTV Hindu) or listen to an audio-only feed. The great thing about the latter is that it works in the background, so you can go about using your iPad while you listen to your preferred NDTV channel. The live video-feed now features a high-quality mode, which is capable of streaming at 512 Kbps, depending upon your connection speed. 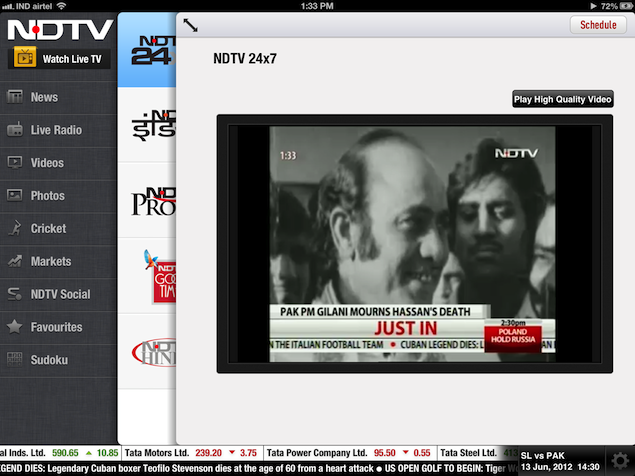 The most refreshing part of the app is its revamped interface, which is cleaner and snappier than one in the previous version. The new design is based on card style navigation, made famous by Twitter iPad app, amongst others. The new design ensures more content stays visible on the screen (without overwhelming the user) and it is easier to move from one part of the app to the other. The black text with large font on a white background gives it a more vibrant look, compared to the dark background of its predecessor. The app is Retina optimised, which means it looks even better on the new iPad.

The NDTV HD app features content that regulars are used to - Videos, featuring clips from popular news and entertainment shows, photo galleries, market updates and NDTV Social, NDTV's own social network frequented by loyal readers and NDTV anchors and hosts alike. To cater to the insatiable appetite of its audience, Cricket gets a more prominent place and the live coverage section is revamped to go with overall app. Sudoku is thrown in for good measure, and it works offline as well, so feel free to give your mind an exercise on a flight. 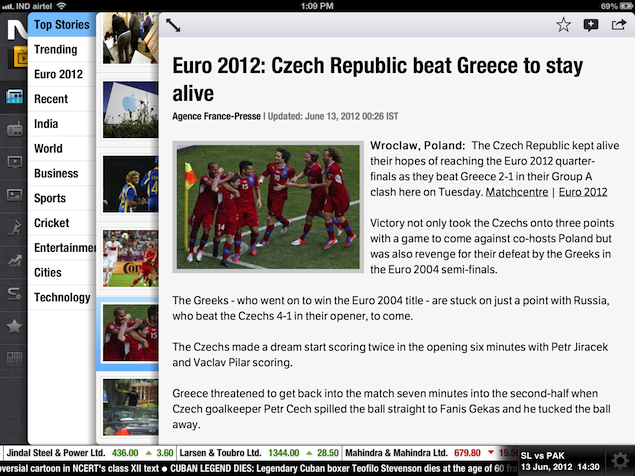 Overall, the app is an exciting upgrade to the NDTV HD iPad app. There's some scope of improvement - the animation while moving between various sections can be a bit jarring at times (we are told a fix is on the way) - but, everything said and done, this app is a must have to keep in touch with news on the move. As mentioned earlier, the app is being appreciated by all, with average 5 star rating in the App Store India (9 reviews) and 4.5 star rating in the App Store US (7 reviews), as of writing this review. The app is already the number 1 free iPad in the news category on the India App Store, less than two days after its release. Get it now!

Disclosure: NDTV Gadgets (this website) and NDTV.com are part of the NDTV group.
Comments