Amid an opposition attack on the recently launched demonetisation initiative, Prime Minister Narendra Modi on Tuesday asked the people to directly convey their views to him on the move via the Narendra Modi app - which is available for Android, iOS, and Windows Phone.

PM Modi asked the public to participate in a survey regarding the move to scrap old Rs. 500 and Rs. 1000 currency notes.

"I want your first-hand view on the decision taken regarding currency notes. Take part in the survey on the NM App," he said in a tweet on Tuesday.

Clicking on the Share Your Opinion section, users are guided to a survey where they are asked questions such as "Do you have any suggestions/ideas or insights you would like to share with PM Narendra Modi?", "Do you think black money exists in India?", "Do you think the evil of corruption and black money need to be fought and eliminated?", "What do you think of government's move of banning old Rs. 500 and Rs. 1000 notes?" 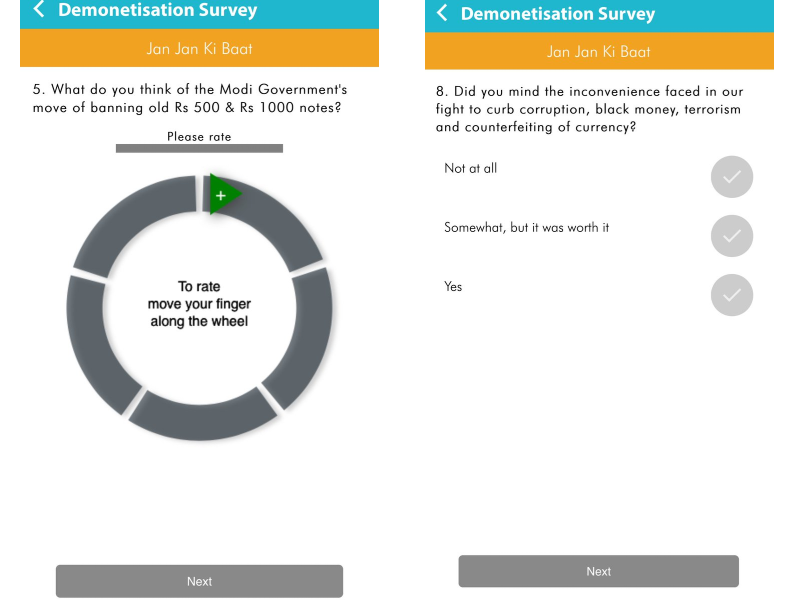 The Prime Minister's move to gauge the views of the people comes at a time when the opposition has escalated its attack on the issue of demonetisation.

On Monday, top ministers held deliberations to firm up a strategy to fast-track adoption of cashless transactions in the wake of the government withdrawing the old Rs. 500 and Rs. 1,000 currency notes.

IT and Law Minister Ravi Shankar Prasad and Power Minister Piyush Goyal met to discuss a strategy to accelerate adoption of cashless transactions in the system to tide over the current crisis.