Competing against Reliance Jio, Bharti Airtel has now updated its My Airtel app for Android and iOS devices with My Coupons. This new feature takes on My Vouchers that are available through Jio's My Jio app. Interestingly, the Gurugram-based telco has also partnered with Paytm to let users make payments on the My Airtel app using their Paytm Wallet. The app has additionally added UPI (Unified Payments Interface) to ease the payment process for users who prefer making transactions through a UPI-based service. The latest My Airtel app is available for download on Android devices via Google Play, while iOS users can get its newest version from Apple App Store.

Similar to My Vouchers on the MyJio app, My Coupons on the updated My Airtel app can be exclusively used for select transactions. As an introductory offer, Airtel is touting a 100 percent cashback on recharge values of Rs. 399 and Rs. 448. This cashback is only available for the first recharge of Rs. 399 or Rs. 448, and the amount will be returned by the operator in the form of multiple coupons - with each worth Rs. 50. Also, these Rs. 50 coupons can only be used for the Airtel prepaid number for which the initial recharge of Rs. 399 or Rs. 448 proceeded. This means that the coupons offered will not be used for recharging any other mobile number. 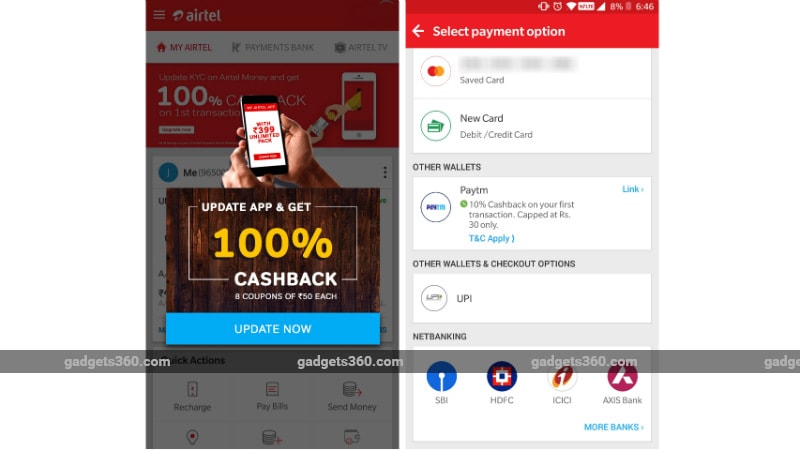 Alongside the availability of My Coupons, the My Airtel app has integrated Paytm Wallet. This integration allows to make payments directly using a Paytm Wallet account. Airtel is also offering a 10 percent cashback (up to Rs. 30) that will be credited in three working days from the date of transaction. Moreover, users have been provided with a UPI payment option.