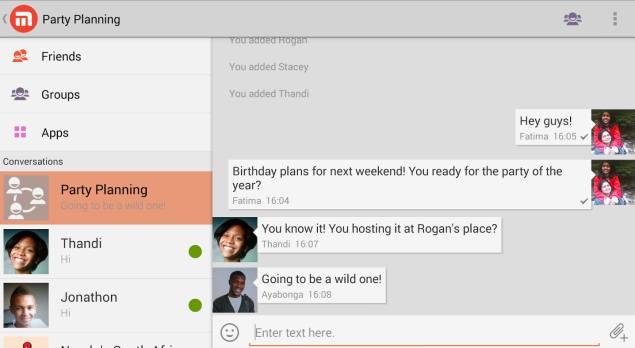 The company rolled out its free service in Hyderabad at a news conference in the presence of its ambassador, former South African cricketer Gary Kirsten.

With 700 million out of 900 million mobile users in India having feature phones, Mxit would be a major and innovative player in India, which is world's largest feature phone market, he said. "Our service turns even a normal phone into a smartphone," he said.

A basic data connection enables a feature phone user to experience smartphone features by downloading the Mxit app for free. An array of apps and games will be available for any Mxit user.

Mxit is available for download across more than 8,000 different feature phones, smartphones and tablets

Mxit offers not just one to one, and one to many chat features, but also facilitates many to many chat. The service is currently available in English and Hindi will also available in 10 different Indian languages including Telugu in six months.

Available on Java, Nokia, iOS, Android, Blackberry and Window Phone operating systems, it allows over 300 characters as compared to 140 characters in a SMS.

Roger Grobler, chairman of Mxit India, said 46 percent of mobile Internet users in South Africa are active on Mxit every month. He claimed that Mxit is rivalled only by Facebook in terms of the number of makes and models of mobile phones it can operate on.

Kirsten, the coach of Indian team which won the 2011 World Cup, said he was excited to be associated with an app developed in his home country and being launched in India, which he considers his second home.
Comments