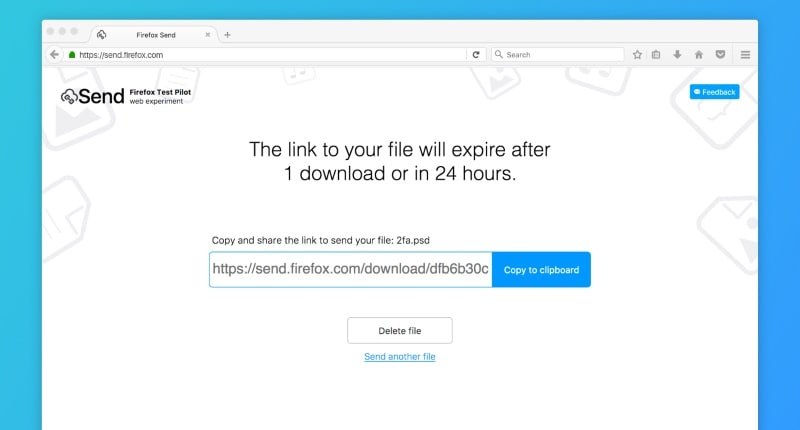 Mozilla, the company behind the Firefox browser, has come out with three really useful experiments under the Test Pilot add-on that will change the way browsers work. One of the notable experiments is the ability to share any file up to 1GB with users of compatible browsers. The other two tools that Mozilla is bringing are Voice Fill and Notes, however it is unknown if all three features will ever make it into the stable release of Firefox.

The browser-based sharing feature is called Send and it allows you to upload any file up to 1GB in size, after which the file will be encrypted on the server and available for download through a link. While Mozilla mentions that this pilot feature is accessible across "modern" browsers, we didn't find it working on Safari for some reason. This works similarly to the services like WeTransfer where a URL is generated for a server-located file. However, there's a catch. Being encrypted and fully private on the client side, Mozilla's Send file sharing feature will be self-destructible either in a time-bound manner for 24 hours or if the file is downloaded once, whichever happens first.

Coming to other two tools, Voice Fill currently works on DuckDuckGo, Google, and Yahoo to initiate search using your voice. Mozilla highlights in its blog that this experiment "will help us [Mozilla] optimise speech to text input so that we can expand support throughout Firefox." The Notes tool is actually a browser plugin that keeps everything that you jot down just like on other note-taking apps - notably, native Pocket integration is already available. Mozilla has promised to bring support for Firefox accounts to enable synchronisation of data. Interested users can test all of the above experimenting tools by going to Firefox's Test Pilot website where you will first need to activate it.