Firefox Lite has been formally launched in India. The Web browser that first arrived in Indonesia in August last year as a rebrand of Firefox Rocket is designed to offer a fast and privacy-focused experience to Android users. Unlike the original Firefox for Android that weighs tens of megabytes, the Firefox Lite is touted to be less than 4MB in size. Mozilla has also announced its partnerships with a handful of Indian entities to boost its business ecosystem in the country. There is also a Life Feed to show content from the existing partners.

At an event in New Delhi on Wednesday, Mozilla asserted that through a soft launch of the Firefox Lite in India last year, the browser helped users save more than 8,000 hours of app launch time and over 33,000 hours of page load time. The browser also saw over two million downloads since its launch in Indonesia last year, the company claimed while addressing the Indian media.

Similar to what was announced specifically for the Indonesian market, Firefox Lite in India comes with a Turbo Mode that is claimed to block third-party, ad-tracking code. The proprietary mode is also touted to reduce data consumption and help websites load up faster than a traditional Web browser. 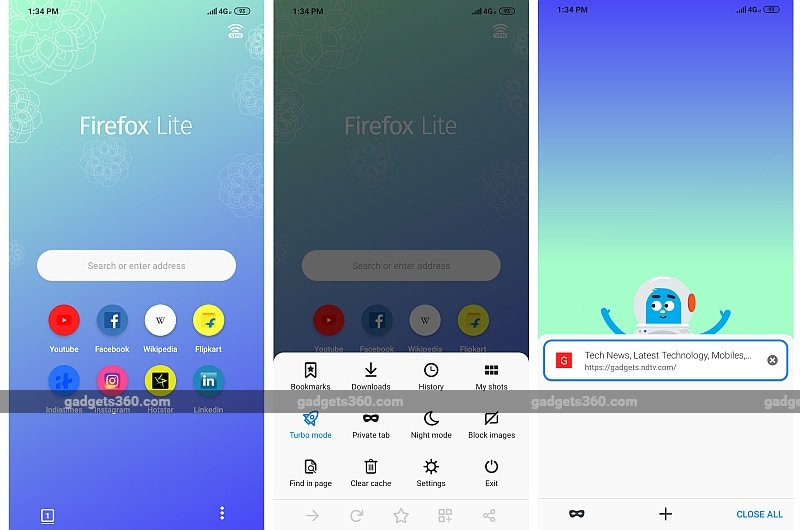 The Firefox Lite also has a feature called “Screenshot the Whole Page” to capture screenshots for offline-viewing of the content. Additionally, Mozilla claims that it has designed the Firefox Lite with private browsing and tracking protection to help users browse websites without a trace.

One of the key advantages of the Firefox Lite over the regular Firefox browser is its lightweight build. The browser is essentially claimed to be less than 4MB in size, which is roughly less than 10 percent of the size of other Web browsers in the market.

The Firefox Lite also has a dedicated Night Mode. Furthermore, there is the traditional multi-tabbing function to let you multitask using multiple tabs.

As a result of the new launch, the Firefox Lite is now available in a total of 15 markets in Asia, including Bangladesh, Brunei, Cambodia, China, Hong Kong, Indonesia, Laos, Malaysia, Myanmar, Singapore, Thailand, Taiwan, the Philippines, Vietnam, and India.

You can download the Firefox Lite on your Android device by visiting Google Play. The app is compatible with devices running Android 5.0 Lollipop or later. Moreover, the Firefox Lite competes against the likes of Opera Mini and UC Browser Mini.

In addition to the launch of the Firefox Lite, Mozilla has announced its strategic partnerships with Indian content providers and digital marketing companies. There are partners such as DB Digital, MoMagic, NewsPoint, and Times Internet.

Mozilla will offer a Life Feed that will appear on Firefox Lite after swiping up the homescreen, showing news, games, and deals from its partners. Also, the company is open to add more partners from India and across Asia to enhance the delivery of video, gaming, shopping, and travel content on its Web browser.