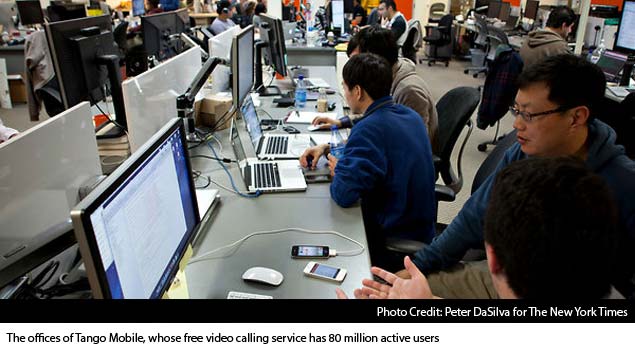 The next competition in technology is your face - anywhere, anytime.

As the cameras and screens of smartphones and tablets improve, and as wireless networks offer higher bandwidth, more companies are getting into the business of enabling mobile video calls.

The details vary from one service to the next, but the experiences are similar: from anywhere in the world with a modern wireless network, a smartphone's screen fills with the face of a friend or relative. The quality is about the same jerky-but-functional level as most desktop video. Sound is not always perfectly synced with the image, but it is very close. The calls start and end the same way, by pressing a button on the screen.

Mobile video calling has risen so quickly that industry analysts have not yet compiled exact numbers. But along the way, it is creating new business models, new stresses on mobile networks and even new rules of etiquette.

Once an interesting endeavor for a few start-ups like Tango, mobile video has caught the attention of big companies. Apple created FaceTime and made it a selling point for the iPad.

In September, the company made FaceTime available on cellular networks instead of limiting it to Wi-Fi systems, almost certainly in response to increasing consumer demand.

Last week, Yahoo purchased a video chat company called OnTheAir. And in 2011, Microsoft paid $8.5 billion for Skype, a service for both video and audio-only calls. Though most people use Skype on desktop and laptop computers, the software for the service has been downloaded more than 100 million times just by owners of phones running Google's Android mobile operating system. Microsoft built a service for its Windows 8 mobile phone that lets people receive calls even when Skype is not on.

Google, which has more than 100 million people a month using its Google Plus social networking service, now offers more than 200 apps for its video calling feature. It says it is interested not in making money on the applications, but in learning more about them so it can sell more ads by getting people to use its free video service, called Hangouts. Hangouts can be used for two-person or group calls, or for a video conference with up to 10 people.

"On a high level, Google works better when we know who you are and what your interests are," said Nikhyl Singhal, director of product management for Google's real-time communications group. "Video calling is becoming a basic service across different fronts." While Mr. Singhal is an occasional user, he said, his 4-year-old daughter "is on it every day."

Don't expect video calling to improve productivity. Tango uses the same technology that enables video calls to sell games that people can play simultaneously. It sells virtual decorations like balloons to drop around someone's image during a birthday call (both parties see the festive pixels). Google says some jokey applications on Hangouts, like a feature that can put a mustache over each caller, seem to encourage people to talk longer.

Currently, popular two-way games like Words With Friends on Facebook work by one player making a move and then passing the game over to the other player, not watching moves as they are made. Another promising area is avatars, like cartoon dogs and cats, that mouth speech when a user wants to have a video call but does not want to be seen.

The prospect of having to appear on-screen at any given moment might sound like a nonstarter for people who worry about bad hair days. But in fact, using mobile devices for video calls may be less bother than it seems.

"There may be natural inhibitions to being seen, but when I'm on a mobile device I'm out and about, so I'm more likely to be presentable," said Michael Gartenberg, a consumer technology analyst at Gartner. "How people use this remains to be seen, but they are starting to expect it."

Yet a new etiquette for mobile video calls is already emerging. People often text each other first to see if it's O.K. to appear on camera. Video messages sent in the text box of a phone, like snippets of a party or a child's first steps, are also useful precursors to video conversations. Mr. Singhal said making avatars for users of Hangout would be "an extraordinarily important area" as well.

The greatest challenge for the business may not be getting more consumers to use the service, but making sure the service works. Most phones have slight variations in things like camera placement and video formatting from one model to the next. "A camera can show you upside down if you load the wrong software on it," said Mr. Setton of Tango.

As a result, the 80 engineers among Tango's 110 employees have adjusted their software to work on more than 1,000 types of phones worldwide. The top 20 models have more than a million customers each, but the complexity of building software for a wider range of phones has made it hard for new mobile video companies to enter the field, Mr. Setton said.

Tango's average video call used to last six minutes, Mr. Setton said, but when the company started adding other applications to go with the videos, like games and designs that float over people, the average call length rose to 12 minutes.