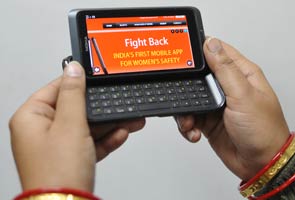 Highlights
A smartphone app launched Wednesday in the Indian capital Delhi aims to fight a rise in sexual assault cases by enabling women to immediately alert friends or family if they feel at risk.

The "Fight Back" app created by Indian non-profit Whypoll will -- at the press of a single key -- send an SOS message via text message, email and Facebook.

Once the SOS is activated, recipients will be able to track the sender's location via GPS and come to her aid.

"I grew up in Delhi and it's always been an unsafe city. And it just keeps getting worse. As a woman, you just don't feel comfortable on the roads," Whypoll co-founder Shweta Punj told AFP.

"I was disgusted by the violence and wanted to do something about it."
Delhi now tops the list of India's most unsafe cities for women, with 489 reported rape cases in 2010, up from 459 in 2009, according to police statistics.

India's rapid economic growth has thrown open new job opportunities for women, but many feel at risk of harassment or assault while travelling on their own to and from work.
In a 2010 survey by the Delhi government, the United Nations and women's rights group Jagori (Wake Up Women), 45 percent of women said they avoided stepping out alone after dark and 65 percent feared taking public transport.

The survey also suggested that police needed to play a stronger role in safeguarding the rights of women.

According to Whypoll co-founder Hindol Sengupta, while users can choose to include a number for the Delhi police in their SOS shortlist, the main focus of the app is to alert friends and family.

"Indians depend far more on their near and dear ones because we don't trust the system to help us," Sengupta told AFP.

"Once you send the SOS, your friends and family will take it up with the police and pressure them into doing something."

It is unclear how the police will handle complaints sent to them via Fight Back -- designed to work with Nokia, Samsung, HTC and BlackBerry smartphones.

A number of police officials contacted by AFP said they were unaware of the app's existence.
Sengupta admitted that the success of Fight Back would hinge on the police's efficiency and willingness to take up reported cases.

"There is no magic solution to this problem, but we are in talks with the police and we hope the app will help them respond fast in such situations."

The Fight Back app is priced at 100 rupees ($1.90) for a year's use. Currently available only in English, the creators plan to offer it in Indian languages and expand its reach to include nine more cities by the end of 2012.

The app comes a year after volunteer activists in Egypt launched HarassMap, an initiative which asks women to send text messages with details of their location when they face sexual harassment.

The aim of HarassMap is to build a map of hotspots where women are more likely to be assaulted and demand an increased police presence in those places.