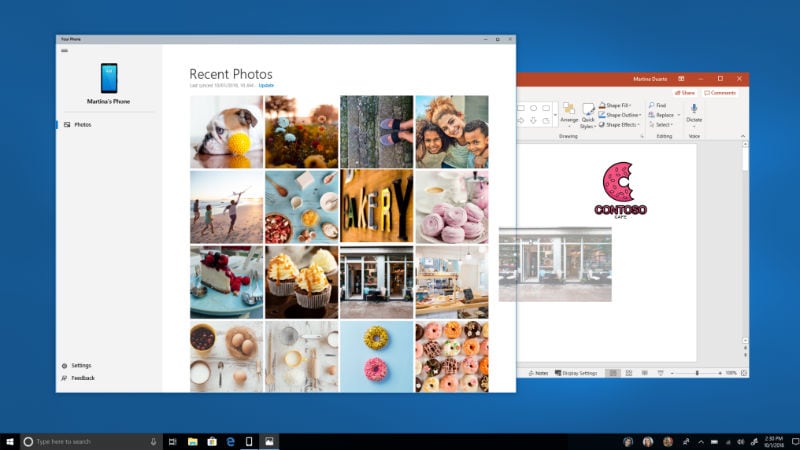 Microsoft Windows Insiders in the Fast Ring who also use Android smartphones can now use the company's 'Your Phone' app to transfer data seamlessly between the computer and handset. Microsoft has started testing the new mobile application that lets its users get access to files on their smartphones from a Windows 10 PC. While there are several other third-party apps and cloud services that have a similar purpose, the Your Phone app promises an easier way to access files across devices. To recall, Microsoft had first introduced the Your Phone app at its Build developer conference in May this year. The company had said that it is making improvements to features that link your phone to your PC, giving access to the phone's text messages, photos, and notifications on the PC for an uninterrupted work experience.

The update comes in the form of Windows 10 Insider Preview Build 17728 aka Redstone 5 for Windows Insiders in the Fast ring. Android users will now be able to test the Your Phone app first. They will get the ability to drag and drop images straight into Office apps and other Windows apps direct from a smartphone. Microsoft also said that it is planning to add support for text message sync and notifications from phones to mirror to a PC. "Snap a pic on your Android, see it on your PC. You can finally stop emailing yourself photos. With Your Phone app, your Android's most recent photos sync to your PC automatically. Need to add a photo to your presentation? Want to spruce up that selfie with some Windows Ink action? Just drag and drop," write Windows Insider Program Dona Sarkar and Senior Program Manager Brandon LeBlanc in a joint blog post while announcing the new Windows 10 Insider Preview Builds.

It is worth noting that the Your Phone app is currently only being tested as part of Microsoft's next Windows 10 update, codenamed Redstone 5. While the update should be available later this year, there is no clarity on whether the Your Phone will come directly in the update or be made available as a separate app when the testing is over.