Share on Facebook Tweet Snapchat Share Reddit Email Comment
Microsoft on Wednesday updated the OneDrive app for iOS with new security features like support for Apple's Touch ID and PIN code lock, along with design tweaks for big screen iPhone 6 and iPhone 6 Plus. The Redmond giant also announced two new ways to share files with Outlook Web App (OWA) and OneDrive for Business. Microsoft says that these new features are rolling out to some Office 365 customers and can be expected to be made fully available by November. 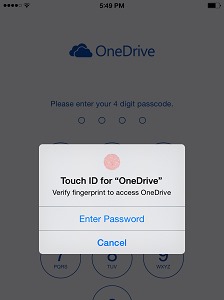 OneDrive for iOS now lets users set a PIN code lock for accessing the app and adds the Touch ID support to let users sign in to the app with fingerprint authentication.

The tweaked design for the iPhone 6 and iPhone 6 Plus shows more files and folders on screen, and more space for making edits to Office documents. Microsoft says that the OneDrive app also has the added ability to sort files and folders (by name, date or size) on iPhone or iPad.

Similar to choosing files from device storage, users can select a file stored on OneDrive account and send it either as a link to the OneDrive file, or as a traditional attachment with granted permissions for recipients. If the file has been sent as attachment, it will appears the same as if it was attached but with a cloud symbol within the file icon.

Currently, the OneDrive for Business integration is available in OWA, OWA for iPhone/ iPad and OWA for Android phone (pre-release). Microsoft says that it is working to bring the integration to the Outlook desktop client in a future version.
Comments