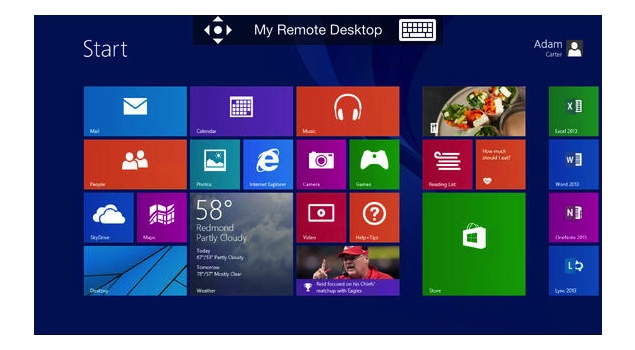 Microsoft has released a free Remote Desktop app for Android, iOS (iPad and iPhone) and Mac, which allows users to access their Windows devices and servers remotely. The apps can be downloaded through their respective app stores.

Microsoft informs that the new app offers remote access to a Windows PC through the Remote Desktop Gateway.

The iOS and Android app offers a multi-touch experience through Microsoft's remote desktop protocol (RDP) and RemoteFX supporting Windows gestures on the iPad and iPhone.

Microsoft's Remote Desktop app also allows users to securely connect to their data and applications with the use of Network Layer Authentication (NLA) technology. It comes with connection centre that allows easy management of all remote connections.

The Remote Desktop app also offers high quality video and sound streaming with improved compression and bandwidth usage, according to Microsoft's claims, in addition to support for easy connection to external monitors or projectors for presentations.

The Redmond giant's Remote Desktop app also comes as a boon for enterprise users, who would be able to use Windows servers and PCs through their Apple devices as workplaces shift to BYOD (Bring Your Own Device).

Microsoft had made a subtle mention of the release of these apps in a recent press release related to enterprise cloud solutions. The release had mentioned that "Microsoft was introducing the Microsoft Remote Desktop app, available for download in application stores later this month, to provide easy access to PCs and virtual desktops on a variety of devices and platforms, including Windows, Windows RT, iOS, OS X and Android."
Affiliate links may be automatically generated - see our ethics statement for details.
Comments