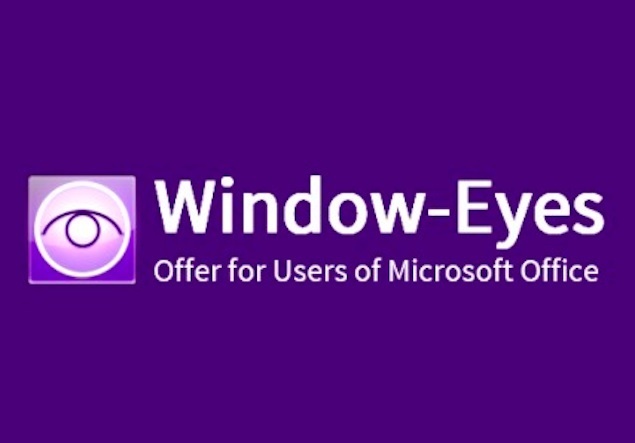 The announcement was made at the fourth edition of Techshare India, which is on-going at the India Habitat Centre, by Stephan Sjostrom, Vice President - Public Sector, Microsoft Asia, as part of his keynote address. The reader will be available only to those users who have Microsoft Office 2010, Office 2013 or Office 365 on their systems. The software can be downloaded from www.windoweyesforoffice.com. It is also mentioned that only users who use genuine versions of Microsoft Office would be able to download it for free.

The Window-Eyes screen reader, according to Microsoft, is an essential tool that is utilised by users who are visually impaired or print-disabled. It enables them to access their Windows PCs to the maximum and makes use of either Braille or speech to help them in this endeavour. Speaking on the launch Arun Rajamani, Head-Public Sector and Education, Microsoft India, said, "Microsoft is focused on providing easy access to technology to the underserved. With Window-Eyes, we know that the visually-impaired people will get access to technology and solutions that give them choice, while meeting a variety of accessibility needs at an affordable price"

Window-Eyes can be used to speak everything on the screen aloud, including text, menu, control buttons and other computing commands. It also allows the user to customise the audio output as per their comfort. In fact even at Techshare India 2014, which is a pan-India conference and exhibition held to address the issue of disability, Microsoft has set up an experimental demo booth to showcase the accessibility features on its Windows 8 operating system for disabled people in companies, schools, and homes. Rajamani also added that in India, a country of more than 70 million disabled people, Microsoft was focused on reinforcing its efforts to take the benefits of computing to a larger set of people across the country.