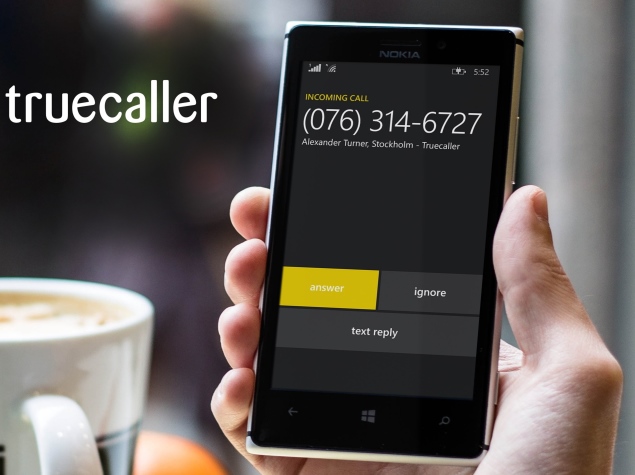 Microsoft and Truecaller on Thursday announced their collaboration to offer the latest version of the Truecaller app (v4.2) exclusively for Windows Phone 8.1-based Lumia device to offer Live caller ID information.

The Swedish company says that with the Live Caller ID Lookup feature on devices running Lumia Cyan Windows Phone 8.1 and above, users will be able to see information of the caller during the incoming call even if it has not been stored in their Lumia device phonebook. Earlier, the Truecaller app on Windows Phone could only show the information of the caller after the call.

With version 4.2 of the app for devices running Lumia Cyan Windows Phone 8.1 and above, Truecaller for Windows Phone finally offers the same Live Caller ID functionality as its Android and iOS counterparts, with the Microsoft opening up the restricted API of the platform for the Swedish firm with the announced partnership.

Microsoft says that while the new Lumia devices will come preloaded with this feature, the existing Lumia users can install the Truecaller app version 4.2 update for Windows Phone 8.1 Lumia Cyan and above, starting Thursday, October 16, from the Windows Phone Store.

"We are very happy to be able to support Truecaller in bringing this great functionality globally to Windows Phone for the first time. Our partnership goes back several years and we have seen that Truecaller is a very dedicated company focused on delivering a great service for its users," said Navdeep Manaktala, Head, Applications & Developer Ecosystem at Microsoft Mobile Devices and Services.

"Microsoft devices are used by millions across the globe and the openness of the platform allowed us to create something exclusively for its users. We are delighted to be associated with Microsoft yet again, and be able to provide the unique Live Caller ID Lookup feature to the users. Truecaller is a widely used app and with this unique service our endeavor is to take Microsoft Device users' experience to the next level," said Nami Zarringhalam, Co-Founder and Chief Strategy Officer of Truecaller.
Comments