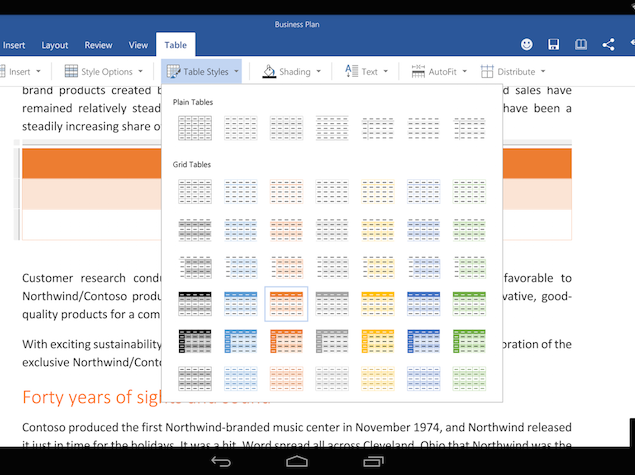 Microsoft has released the preview versions of its Microsoft Office apps for Android tablets on Google Play. The Redmond giant had previously made the preview available to users who completed a survey back in November. Now, interested users do not have to go through the hoops to use the preview apps before the final releases hit Google Play officially.

The preview versions of the Microsoft Office apps for Android tablets are now available for download from Google Play, specifically, Word, Excel, and PowerPoint.

With the release of the preview versions to Google Play, Microsoft has also added support for Android 5.0 Lollipop, which is great since previously the preview was restricted to Android 4.4 KitKat only. For the preview to work, the Android tablet has to fall in between the screen sizes of 7-inch to 10.1-inch. So, larger 12-inch Samsung Galaxy tablets are excluded. Also, it only supports ARM-based tablets and there is no word on support for Intel-based ones yet.

If you do go ahead and install the apps, note that they are still in the testing stages and not everything might work smoothly. In any case, Microsoft would like to know what you think about its apps so head over to the Google+ community to give your comments, good or bad.

Interestingly, free Microsoft Office apps have been available for iPad, iPhone for some time now and they received great traction when released.