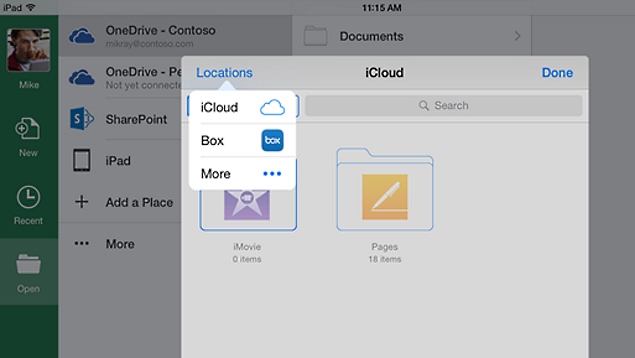 Microsoft on Tuesday announced two new enhancements to its Office suite of apps for iOS devices, bringing the ability to open, edit, and save files from iCloud, Dropbox and other third-party cloud storage services, as well as the upcoming Office Online integration with cloud services that would enable users to view and edit files in any browser. On the other hand, Microsoft has also detailed the new features it added in an update to the recently introduced Outlook for Android and iOS apps.

Starting with the updated Microsoft Office apps for iOS, version 1.6 of the Word, Excel, and PowerPoint apps get the new "Locations" picker, allowing users to add more third-party cloud storage providers. This will also enable users to open, edit and save documents on these cloud storages within the apps.

The updated now available to download from the App Store. Microsoft notes that it is also working hard to integrate the same features in its Office apps for Android and Windows 10 as well, but has not provided a timeline as yet.

Also for the Web, Microsoft has integrated cloud services in Office Online suite enabling users to open, view, and edit documents stored in those services in any Web browser. As yet the company has Box, Citrix, and Salesforce already working as partners for its new Cloud Storage Partner Program, and says it is looking forward to working with other service providers in the future.

Meanwhile, the recently launched Outlook apps for Android and iOS, based on Acompli, have got some new features like PIN lock, quicker remote wipe execution, IMAP support, toggle conversation view for iOS, and the ability to customise swipe gestures on Android.

The Android and iOS Outlook apps now implement password enforcement using Exchange ActiveSync. Microsoft says that the quick remote wipe has also been improved, as "the Outlook app will reset and Outlook email, calendar, contacts and files data will be removed from the device, as well as from Outlook's cloud components. The wipe will not affect any of the user's personal apps and information."