Microsoft on Tuesday announced the availability of its new Office 365 Personal subscription in India, priced at Rs. 330 per month, or Rs. 3,299 for an annual subscription.

The Redmond giant had first announced the Office 365 subscription meant for individuals in March, followed by a limited region roll-out in April.

Office 365 Personal is available for individuals at a lesser price than Office 365 Home Premium (now called Home), which now as the company identifies, is meant for households. The Office 365 Home subscription in India costs Rs. 420 per month, and Rs. 4,199 for an annual subscription.

The Office 365 Personal subscription can be registered on a single PC (or Mac), single tablet and single phone, with access to seven 'full-installed Office applications', namely Word, Excel, PowerPoint, Outlook, OneNote, Publisher, and Access, on one PC or Mac computer, and one tablet (including iPad). Office 365 Personal subscribers will also get online access to Office apps, namely Microsoft Word, Excel, PowerPoint, and OneNote.

Office 365 Home gives the same app access on up to five PC or Mac computers, or five tablets. Both Office 365 plans will get 20GB of additional OneDrive storage, and updates for the most recent version of Office.

In late-March, CEO Nadella announced the high-profile launch of Microsoft Office for iPad, with touch-friendly Word, Excel, PowerPoint apps. At the same time, it made editing documents free on mobile platforms, with its Office Web Apps (now Office Online).

In April, Microsoft updated its Office Online apps with new features. The Redmond-giant also announced that Office Online apps will be available via Chrome Web Store as well - essentially bringing the productivity apps to the Chrome OS, apart from Chrome browser users. 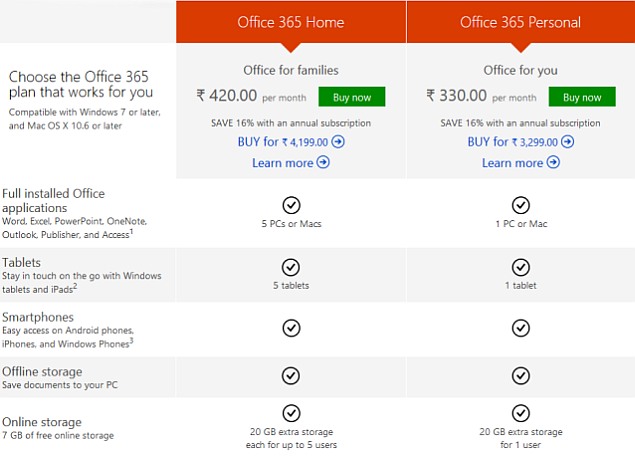