Microsoft on Thursday announced some changes to its OneNote app for Android and iOS versions.

First up is the merging of the Microsoft OneNote app for both the iPhone and iPad into one single universal app. The Redmond-based tech giant has asked iPad users to download the new OneNote app from App Store. The instructions can be seen when the current OneNote for iPad is opened. iPhone users however, don't need to do anything as Microsoft has merged the iPad app version into the iPhone version.

"With the universal iOS OneNote app, iPad users will have some of the recent updates made to the iPhone app, and we'll be able to move even faster to update the app with new features," added the blog post.

The iPad users as a part of the updated universal app, would now be able to access OneNote directly from the Notifications panel, like in iPhone models, and can also go through their recent notes via the "Recent Notes" view (seen above). Also included in the new app is the Page Previews feature. iPad users would be able to see the previews once turned in to landscape mode (seen below). Also, the app fixes bugs dealing with document/whiteboard camera. 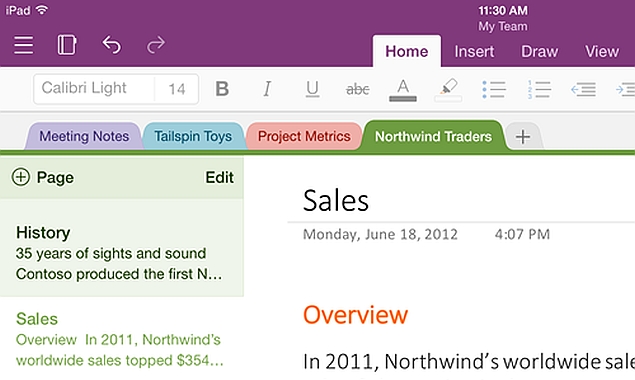 As for the Android OneNote users, Microsoft has added the feature using which people can move or copy a note from a page or notebook to another section or notebook. This can be done by tapping and holding the page needed to be copied or moved, selecting the operation, then selecting the destination. Users can also pin pages directly to their home screen as a shortcut. Also included is the ability to move a note from Quick Note section to Notebook.

Microsoft will also let Android Wear users view recent notes on their smartwatches in an upcoming update. The firm will release the beta version in next few days. "...you will be able to get a sneak peek at the functionality ahead of time by joining our Beta Community, or wait a few weeks for it to come to the Play Store."