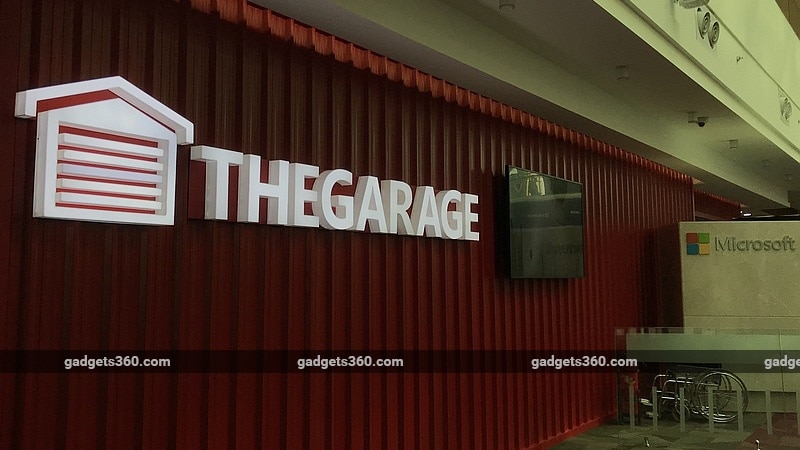 Microsoft on Monday formally inaugurated its first Garage facility in India. Spread across 8,000 square feet, the new Garage facility gives Microsoft employees a resource to support their experimentation and help them nurture new ideas. The facility is located at the Microsoft Development Centre in Hyderabad, Telangana and includes three dedicated lab sections, including a Hub for hackathons and workshops, a Makers Space, a Advanced Makers Space with electronic workbench, 3D printers, laser cutter, and PCB milling machine for creating prototypes, as well as a Reality Room to enable developments around Augmented Reality (AR), Virtual Reality (VR), and Mixed Reality (MR). There is also a dedicated space and equipment to enable deep learning developments. The Redmond giant first launched the Garage as its programme to support ideas generated by employees back in 2009.

Some of the projects that have successfully been launched by Microsoft employees through the Garage programme include Seeing AI, SMS Organizer, Favourite Lock Screen, and Kaizala. India has been one of the focus markets for the Garage team for a long time, and the latest facility is the second largest after the one located in Redmond, as specified by Jeff Ramos, Partner Director of Microsoft Garage, during a press briefing at the Garage facility on Monday. The executive also stated that work for the Garage facility in India began 12 months ago and its operations have been functioning at the same venue without the facility for some time.

Apart from the new facility in Hyderabad, Ramos at the press briefing revealed that Bengaluru is next on the radar for Microsoft. "India is the place in the world, outside North America, where we have great people with creative ideas," he said, adding, "We have committed plans to open our Garage facility in Bengaluru in this calendar year."

Microsoft has assigned the Garage programme in India to Reena Dayal Yadav, who was previously heading a Makerz Lab focused on Internet of Things (IoT) at the same Developer Centre in Hyderabad. "The success of the Garage is to harness the creativity of our people to work on new ideas," Yadav told the reporters during the Monday briefing.

Alongside giving a platform to employees to give their ideas and create new solutions, Microsoft Garage includes a Ship channel that helps people take their projects to the market. On how Microsoft decides the place for its Garage facility, Ramos said, "Where we have smart people, who work hard, we open our Garage."

The Makers Space, from outside

Speaking at the launch of the first Garage facility in India, K. Taraka Rama Rao, Minister for IT, Government of Telangana, said, "Telangana is fast evolving as the hotbed for innovation, we are really glad that Microsoft has chosen Hyderabad as the location for The Garage in India." The inauguration function was also attended by Jayesh Ranjan, Principal Secretary, Government of Telangana, Microsoft India Corporate Vice President of Cloud and Enterprise Anil Bhansali, and Microsoft Global Corporate Vice President of Artificial Intelligence and Research (AI&R) T.K. Rengarajan.

The Makers Space, from inside

Furthermore, the developers working on the SMS Organizer app that was launched recently to organise messages on Android devices have added Indic language support with Hindi and Telugu languages initially under a new beta version to support the new development. The team is in plans to expand that localisation effort by bringing more Indian languages on board in the coming future.

Disclosure: Microsoft sponsored the correspondent's flights for the launch event in Hyderabad.