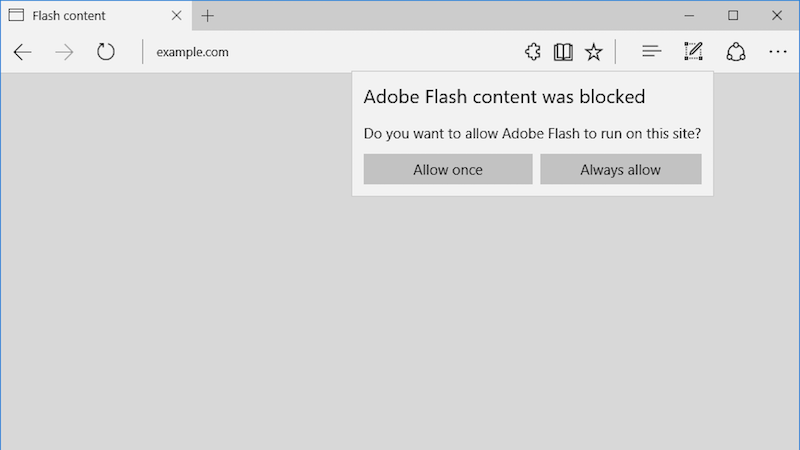 After Chrome's attempt to switch to over HTML5 as the default over Flash, and Mozilla blocking Flash content in Firefox, it's now Microsoft's turn to turn its back on the dying multimedia plugin. Microsoft says that its next release of its Edge browser will block Flash content by default, and use HTML5 where possible.

Microsoft plans to roll out the update to Windows Insider preview builds soon, with a stable Windows 10 Creators Update due next year. After the update, users will be able to choose whether they wish to load the plug-in or not for sites that still depend on Adobe Flash. The browser will remember your setting for future visits. For sites that already have a HTML5 option, Flash will not load at all and the browser will provide a "clean HTML5" experience.

It's a popular opinion among the likes of Apple, Mozilla, Google, and Microsoft that moving to HTML5 will lead to faster load times and is more energy efficient as compared to Adobe Flash Player. Microsoft in its blog post acknowledged the importance Flash has had over the years and says that the transition to HTML5 will begin slowly and it will allow Flash for popular sites. The Redmond-based giant, however, did not list the names of popular sites that will continue to display Flash content on Edge.

"In the coming months, we will actively monitor Flash consumption in Microsoft Edge and will gradually shorten the list of automatic exceptions. At the end of this process, users will remain in control, and will be able to choose Flash for any site they visit."

Microsoft is urging developers and publishers to convert to JavaScript and HTML5 for a complete transition. The company is not clear on how long the transition will take but with its announcement, Microsoft joins the list of Apple, Google, Mozilla to move on from Flash and move towards a faster and more secure Web experience.

Amazon Prime Video Is the Netflix Discount You Always Wanted