In a surprise move last week, Microsoft said it was bringing its Edge Web browser to Android and iOS platforms. A week later, the company has made a preview of Edge available on Google Play for customers with Android devices.

Last week, the company released a preview version of Edge for iOS via test flight beta channel. At the time, the company was not yet ready to release the Android version of Edge, and instead was only accepting requests from customers who wanted to have Edge on their phone.

If you had signed up to be notified about Microsoft Edge's availability on Android, you may have received an email from the company. "Thank you for your interest! The Microsoft Edge Preview for Android is now available for download in the Google Play Store," the message states. 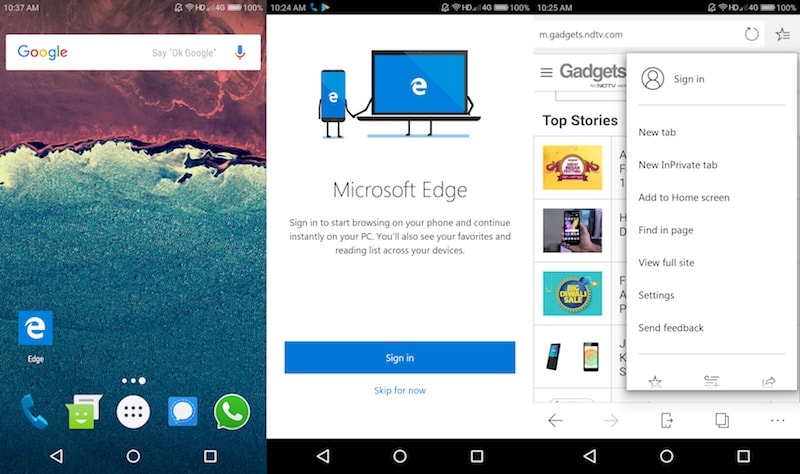 Microsoft Edge Preview for Android offers a range of features that you may have appreciated on its desktop client. There is Continue on PC, which lets you pick up things from where you left off between your mobile device and PC. Microsoft says Edge will also sync a user's favourites and reading lists across devices.

There is also Hub View which lists all your favourites, reading list, history and books all in one place. Then of course, there is the Reading View, which reorganises content on a webpage to make it easier for a reader to read them.

Microsoft has also thrown in a QR Code Reader, which pulls up information once it has scanned it, and Voice Search, letting people ask questions without the hassle of typing things.

Microsoft Edge for Android is using Blink rendering engine from the Chromium browser project. "This approach gives us more control and better performance than using the Android WebView control, but means that we are shipping our own copy of the rendering engine in the app. Much like other Android browsers based on Chromium, we expect to keep up with Chromium releases," the company said last week.