Microsoft Edge Based on Chromium Project Debuts on Windows 10, Available for Download in 2 Distinct Builds

Microsoft has released the first Edge builds that are based on Google's Chromium project, the powerhouse of Chrome browser. The Redmond giant has notably brought both Canary and Dev builds of Chromium-based Edge browser that are available for download on Windows 10 PCs. While the Canary builds will be updated on a daily basis, the Dev builds will receive weekly updates. Microsoft is also in plans to bring support for Mac and all other Windows versions over time. The Chromium adoption was announced in December last year.

"In these first builds we are very much focused on the fundamentals and have not yet included a wide range of feature and language support that will come later," writes Joe Belfiore, Corporate Vice President -- Windows, Microsoft, in a blog post. "You'll start to see differences from the current Microsoft Edge including subtle design finishes, support for a broader selection of extensions and the ability to manage your sign-in profile."

Microsoft promised its move towards Chromium late last year, but instead of bringing Chromium-powered Edge to all its supported Windows versions, the company has initially limited the experience for 64-bit Windows 10 machines having English as their default language. The company does mention that it is planning to bring new Edge with Chromium support to other Windows versions and even Mac devices at a later stage.

In a separate developer-focused blog post, the Microsoft Edge team underlined that it received "great support" from Google's Chromium engineers to adopt the new change. "Our plan is to continue working in Chromium rather than creating a parallel project, to avoid any risk of fragmenting the community," the team added.

Unlike providing the Chromium-based experience through a single channel, Microsoft has adopted Canary and Dev as the two channels. The Canary channel is specifically designed for enthusiasts, though Microsoft says that it uses the same channel internally "to validate bug fixes and test brand new features". Thus, it is not recommended for testing purposes. 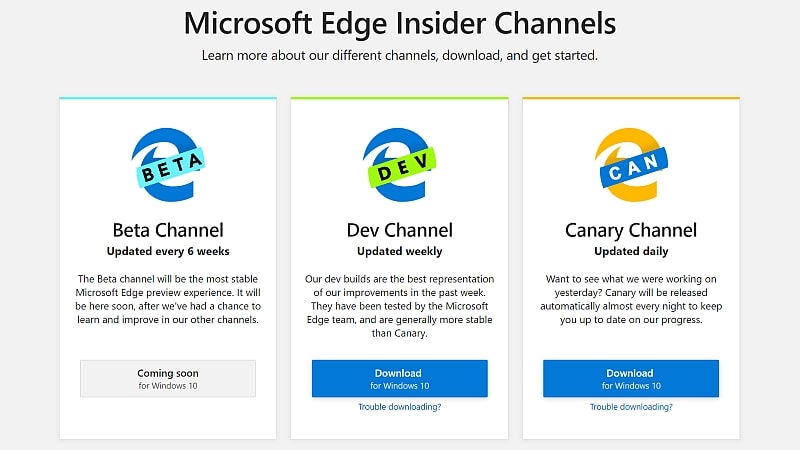 Microsoft Edge based on Chromium comes in Canary and Dev builds

Instead, the Edge team at Microsoft has taken the Dev channel to offer a testing-specific build on a weekly basis. "The Dev channel is still relatively fresh -- it's the best build of the week from the Canary channel. We look at several sources, like user feedback, automated test results, performance metrics, and telemetry, to choose the right Canary build to promote to the Dev channel," the team mentioned.

Microsoft also has plans to bring the Beta and Stable channels to offer the Chromium-powered Edge to the masses in the future. Moreover, it is worth pointing out that the existing version of the Edge browser on your device at the moment will remain unchanged -- the experience is exclusively available through the Microsoft Edge Insider Channels.

Microsoft is also reportedly working on various features such as Fluent Design integrations, Set Tabs Aside, synchronisation with Edge for Android and iOS, and Chromecast support. These are likely to be available in some future Chromium-based Edge builds.

You can download the latest Microsoft Edge Dev or Canary build through the Microsoft Edge Insider website on your Windows 10 machine today. Users with Windows 8.1, Windows 8, Windows 7, and macOS will have to wait for some more time.