Microsoft has officially confirmed that it will bring its Microsoft Outlook Web App for Android users later this year, but has not provided an exact date for its release.

The firm detailed the Outlook Web App's features in its Office blog post as a part of the Microsoft Exchange Conference (MEC) which is being currently held in Austin, Texas. Notably, the Outlook Web App for iOS was available since July 2013.

The Outlook Web App would let the users experience all the features of the Microsoft Office 365 including three new features that have been highlighted the most by the firm: 'Clutter', 'Enhanced Document Collaboration', and 'Groups'.

Clutter, in simple terms, is a tool for clearing the unwanted emails that the users face every day in their office mails. "People need a simple - but accurate - way to manage the high volume of email messages they receive. There should be a way to separate out unimportant items from important ones without having to set up and manage large numbers of inbox rules... which can get complicated very quickly," states Microsoft's Steve Chew in the blog post. 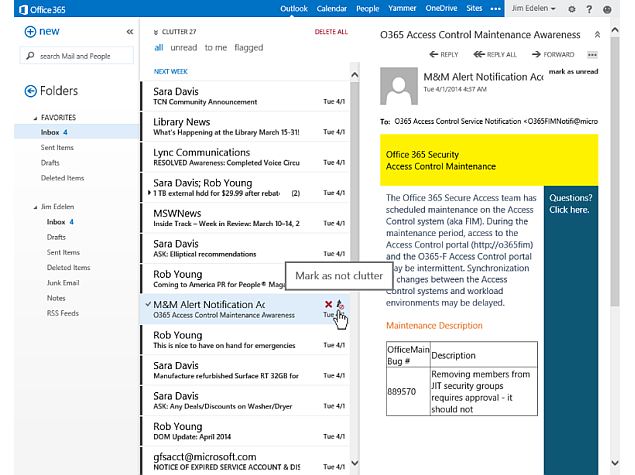 The feature is meant to learns which mails users are responding to, and which they are ignoring. This is done by the help of Office Graph technology by Microsoft that was introduced earlier in March. After Clutter reads the users behaviour towards the emails, clutter starts to show only those mails which are often or are most responded and clicked by the users. This however, eliminates the user's need to set-up rules for each folder.

Users can also change the settings and mark other mails as 'important', which will be showed every time as a top priority in the mailbox.

The second feature introduced in the upcoming Outlook Web App for Android is 'Enhanced Document Collaboration'.

As a part of this feature, Microsoft's Outlook Web App now "includes full integration with OneDrive for Business, allowing you to easily share files stored in the cloud as attachments in your email." User can share a file by two via the Web App and the OneDrive for Business. 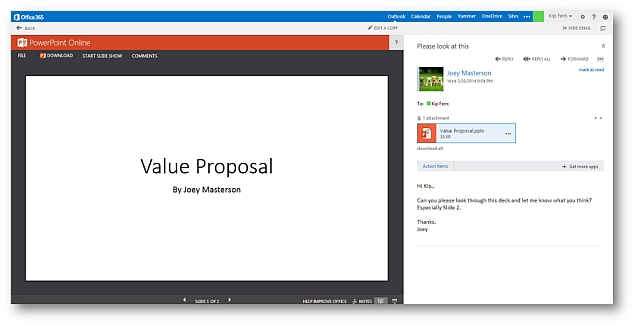 Microsoft also describes the Office Online feature, which comes integrated directly into the email, and will let users "view and edit documents side-by-side with the original email conversation." Group collaboration has been also revamped by Microsoft as the users can now perform "real time co-authoring" using Microsoft Office Online. All the recipients who have the permission can change the single document at the same time without making multiple copies.

Image viewing has been also bumped up. "Images are also shown in this same side-by-side view, allowing you to read the contents of the email as you browse the pictures you've received."

Lastly the firm talks about 'Groups', Microsoft's concept that first reached Yammer, a social networking website sold to Microsoft, and details some of the features of it in Office 365.

Users can create or join different groups of people and share their content with the ones in the group only. Clicking on a group, would open the group's conversation feed. The same feature is available in Yammer. 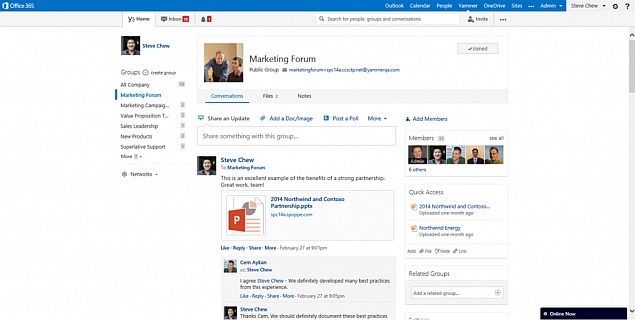 "This means however you prefer to work - whether you live only in email, only in Yammer, or both - you can participate in the group. We're creating a collaboration tool that will allow everyone in your organization to work more closely together, in their preferred manner."

Content like images, articles, and videos can be shared in the groups. One can even read the preview of the shared article and decide whether to read it further or not. Users additionally get different calendars and can overlay their own calendars over it.

The Outlook Web App's Group feature will include two groups - public and private. The groups are public by default and can be made private.

"We're really excited to deliver these enhanced email and collaboration experiences in Outlook Web App and across mobile devices. We're bringing an entirely new way to think about email as a continued enabler to how people get work done whether in the office or on the go."

Microsoft last week unveiled its suite of Office apps for iPad and made some important changes to its apps for iPhone and Android mobile devices. With the latest update of Microsoft Office Mobile for iPhone and Android, editing Office files is now free for 'home use'. Earlier, users could only view Word, Excel, and PowerPoint files on their mobile devices, but editing them required a paid Microsoft Office 365 subscription.