Microsoft's Cortana Virtual Assistant Is Headed to Android and iOS

Microsoft on Tuesday confirmed that its Cortana virtual assistant will be available on Android phones and for Apple's iPhone later this year. The company also announced that Windows 10 will ship with a new Phone Companion app that will help users connect their Windows PC to whatever phone they own - whether it's a Windows phone, Android phone, or an iPhone.

Cortana is Microsoft's answer to Google Now that aims to provide users information as and when it might be needed. For example, it can look at your shopping list and remind you to pick up milk when you are at the grocery store or analyse your email for flight tickets and tell you when it's time to leave for the airport. It can also lookup and answer queries on demand.

On Windows, Cortana is tied heavily to Microsoft services, and the experience on Android and iPhone is likely to be limited in comparison, similar to how Google Now is crippled on iOS. However, users will still be able to use services like intelligent reminders and Cortana notes that sync across multiple devices. Features like toggling settings or opening apps, as well as the ability to invoke Cortana hands-free by saying 'Hey Cortana' require special integration with the OS and won't be available on Android or iOS at launch, Microsoft said.

Cortana, which has so far been available only on Windows Phone, will make its debut on the desktop with Windows 10. Explaining the decision of brining Cortana to Android and iOS via a blog post, Joe Belfiore, Corporate Vice President, Operating Systems Group, Microsoft said the company realises "that many people use iPhones or Android phones" and "everything important to you should roam across the products you already own." Cortana for Android and iOS is designed to be a 'companion app' for Windows 10 users. 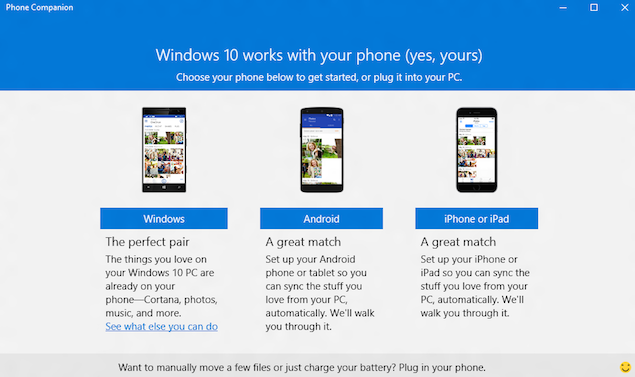 Not to be confused with Microsoft's other announcement, which is the new Phone Companion app for Windows 10. Upon first launch, this app will prompt users to pick the phone they own - Windows phone, Android phone, or iPhone. While Windows users won't need to do anything else, Android and iOS users will be prompted to "follow a few easy steps to get the right apps on your phone to make it work great in conjunction with your Windows 10 PC." This will setup apps like OneDrive, Music, OneNote, and Office on the user's phone. The Phone Companion will also help Android and iOS users install Cortana on their phones.