Microsoft Office 365 Gets Replaced With Microsoft 365, Coming on April 21

Microsoft 365, the suite that was initially aimed at enterprise users and was available with a bunch of services including Office 365, is expanding further and reaching end consumers. The Redmond company on Monday announced that starting April 21, Office 365 will become Microsoft 365. This means that the customers who previously used Office 365 will get an upgraded experience through the new offering that is touted to be the “subscription for your life” and will include not just Office apps but also OneDrive cloud storage and an all-new Outlook. Microsoft has also revealed two new apps, namely a Microsoft Family Safety app and Microsoft Teams for consumers.

With a view to offer the fresh experience, Microsoft 365 Personal and Microsoft 365 Family subscriptions will be available next month. The new subscription plans will replace the Office 365 Personal and Office 365 Home editions and will continue to offer desktop Office apps, 1TB of OneDrive cloud storage per person, and 60 minutes Skype minutes -- alongside “advanced security features” and ongoing technical support. Additionally, there are new features and advancements to deliver an uplifted experience altogether.

In terms of major upgrades, Microsoft 365 has received an upgraded Microsoft Editor that comes in more than 20 different languages and is accessible through Microsoft Word, Outlook.com, and as a standalone browser extension for Microsoft Edge and Google Chrome. Microsoft Editor uses artificial intelligence (AI) to provide features such as spelling and grammar corrections and refinement suggestions such as acronyms, clarity, and formality in a real time. All this works just how you use writing assistance from the online grammar checking site Grammarly. 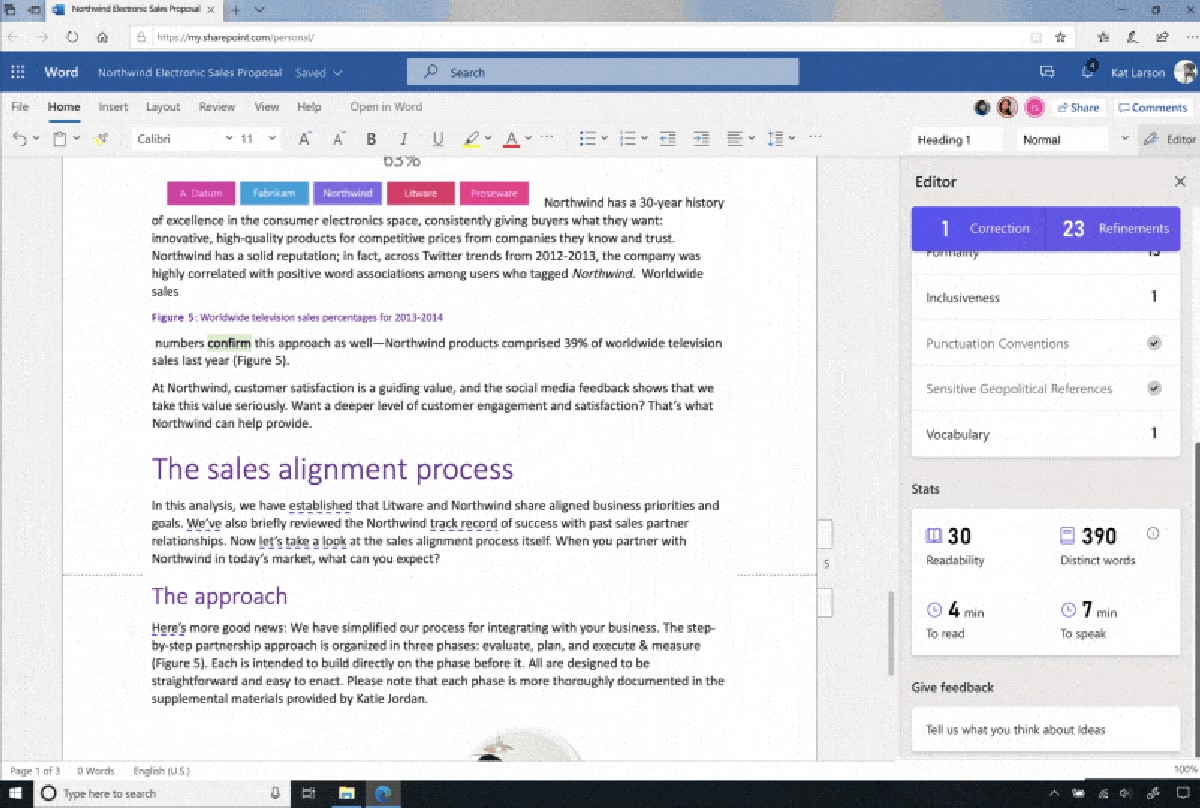 However, in addition to standard writing suggestions, Microsoft Editor comes with a similarity checker that leverages plagiarism-checking capabilities to help writers and editors produce original content. It also provides the option to insert relevant citations just at one click.

In addition to the AI-powered Microsoft Editor, the new suite for consumers includes a Presenter Coach in PowerPoint to help users enhance their public speaking skills.

The new Presenter Coach listens to your tone of voice and gives feedback in a real time to highlight areas that require some variations. You'll also get speech refinement training through grammar suggestions, including how to better phrase your speech. Microsoft is bringing its Presenter Coach to everyone through a free preview, though it will eventually be provided to Microsoft 365 subscribers.

Aside from Presenter Coach, Microsoft has upgraded the PowerPoint Designer with over 8,000 images, 175 looping videos from Getty Images, 300 new fonts, and 2,800 new icons that all will be provided to Microsoft 365 subscribers.

Microsoft is also upgrading the experience on Excel by bringing a Money in Excel solution. This is aimed to help users easily import transactions and account balances and customise workbooks. The new addition is also designed to deliver personalised insights on spendings. Initially, Money in Excel will be available in the US in the coming months.

Microsoft has also developed new data types such as food, movies, places, chemistry, and even Pokemon. These will let you construct your data related to over 100 topics and get entries such as nutritional information of a certain food item or evaluate different types of breeds by applying new data types.

The new data types and smart templates will be provided to Office Insiders this spring and to Microsoft 365 Personal and Family subscribers in the US in the coming months.

Microsoft is also taking Outlook on the Web to new levels with the ability to sync personal calendars. The company is additionally expanding its Play My Emails on Android. The feature is so far limited to iOS users and is designed to offer a hands-free experience for checking new emails. Further, Microsoft Search has also received natural language recognition on both Android and iOS platforms.

Alongside the new upgrades, Microsoft has brought its answer to Google's Digital Wellbeing app through the Microsoft Family Safety app that will be provided to Microsoft 365 subscribers on Android and iOS. The app is designed to help you monitor your family's digital safety and track screen time across Android, Windows PCs, and Xbox. There are also features such as location sharing and notifications that can be useful to track the location of family members and receive alerts when they reach school or work. 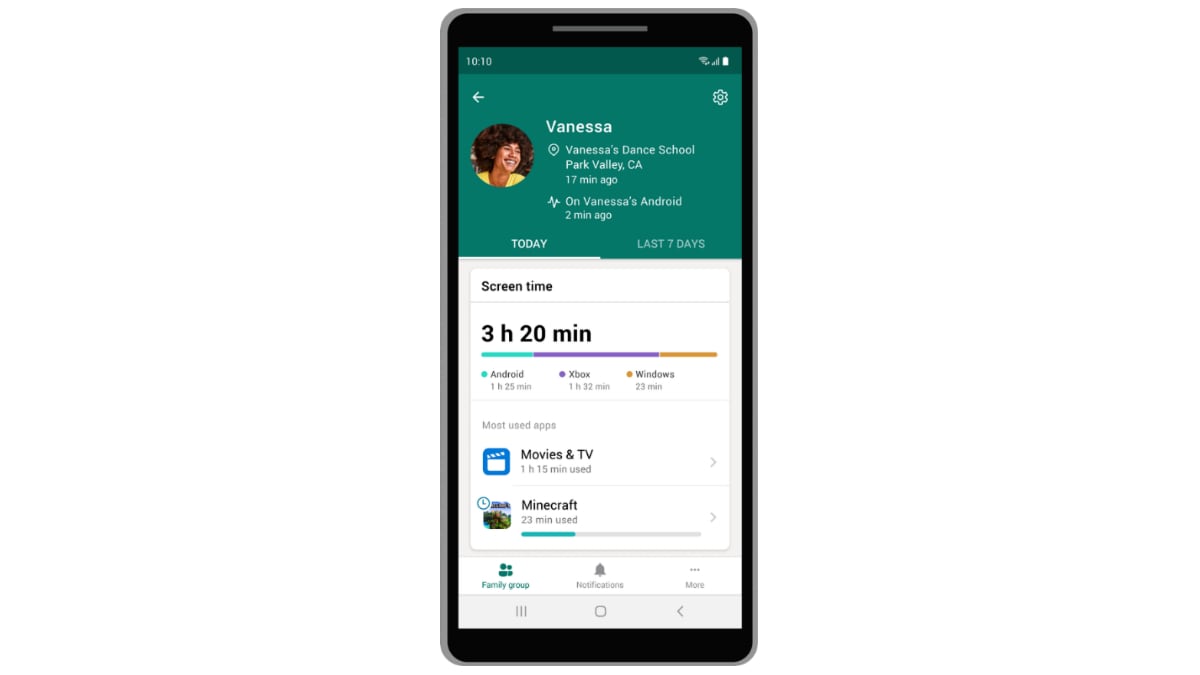 The Microsoft Family Safety app can also be used to protect kids from exploring new apps and online services on their devices. Parents can also add content filters to steer their kids away from inappropriate content.

Microsoft will bring the Family Safety app to iOS and Android users in the coming months.

In addition to the Family Safety app, Microsoft has announced Teams for consumers to let individuals stay connected with both their personal and professional lives. Microsoft Teams recently surpassed the mark of 44 million users, thanks to the work from home culture due to the coronavirus outbreak. But the software giant is evidently looking to boost that number. Thus, we're getting Teams for consumers in the coming months.

Microsoft Teams for consumers will let users create groups for conversations with multiple friends and family members, make video calls, and collaborate over shared to-do lists. Users can also organise their family calendars and store information such as their Wi-Fi passwords or account information. Furthermore, there will be the option to see location updates of family members.

Microsoft also confirmed to Gadgets 360 that Microsoft 365 Personal will be available in India at Rs. 420 a month, whereas Microsoft 365 Family will come at Rs. 530 a month. Moreover, all new subscribers will get a free one month trial.