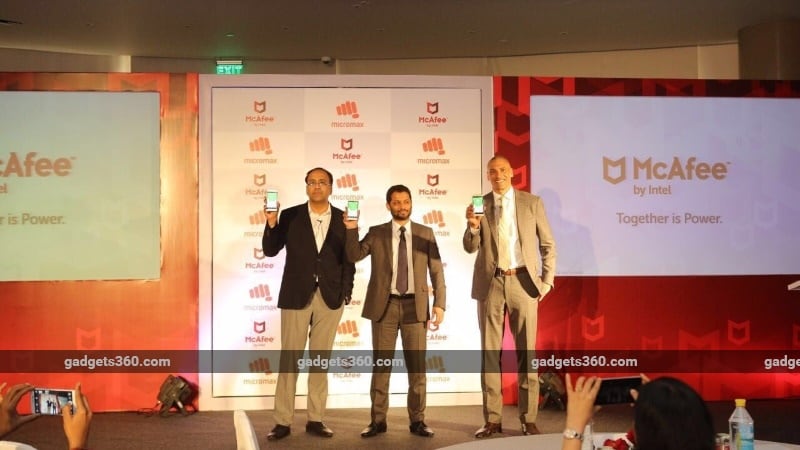 The McAfee Mobile Assistant is called an "all-in-one security and optimisation app that offers protection from risky apps, malware, and potentially unwanted programs." At the joint announcement in New Delhi, Christopher Young, Senior Vice President, General Manager, Intel Security Group, said, "With smartphones becoming an integral part of our connected lives, it is important consumers realise threats that exist in the digital world and understand how to safeguard their valued data." He also shared that the mobile malware will continue to grow and target vulnerable consumers, and as the online activities like Internet banking are evolving they need robust protection.

As we said, the Intel's McAfee Mobile Assistant will be loaded on future Micromax devices while some existing smartphones will get the app via an OTA update starting in April this year. Anand Ramamoorthy, Managing Director - India and SAARC, Intel Security Group, said that the OTA update will bring the exact same features as the preloaded integration.

Commenting on the launch, Vikas Jain, Co-Founder of Micromax Informatics said, "At Micromax, we realise that security of data on smartphones is critical and as one of the world's largest cyber-security organisations, Intel Security was an obvious choice for us to partner with; given the company's global pedigree, strong lineage and R&D capabilities."

It is worth mentioning that McAfee Mobile Assistant is already featured in a few smartphones available in India like Lenovo Vibe X3.

Flipkart Now Said to Be Looking to Raise Up to $1 Billion
HPE to Buy Nimble Storage for $1.09 Billion