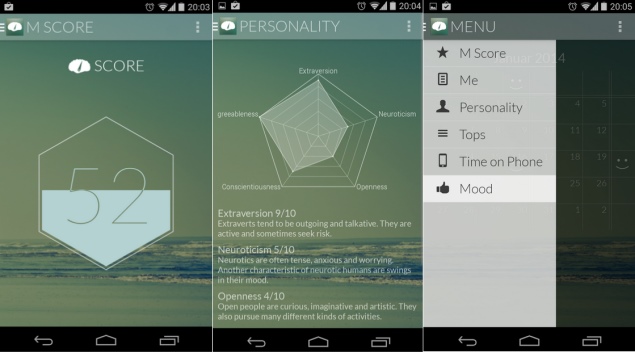 Here comes an app to keep track of your daily smartphone digital diet.

Install and see how much time you are spending on the phone or which apps or games you are hooked to.

Scientists at University of Bonn, Germany, have developed Menthal that runs on Android 4.0 Ice Cream Sandwich, or newer.

"If you would like to go on a digital diet, we would provide you with the scales," said Alexander Markowetz, junior professor for computer science at University of Bonn.

"Menthal would provide reliable data for the first time. This app can show us in detail what someone's average cellphone consumption per day looks like," added Markowetz.

The researchers used Menthal to examine the phone behaviour of 50 students over a period of six weeks. A quarter of them used their phones for more than two hours a day. On average, participants activated their phones more than 80 times a day - every 12 minutes on average.

"Some of the results were shocking," commented Christian Montag.

Whatsapp alone took up 15 percent of the time while Facebook nine percent. Games accounted for 13 percent, with some subjects gaming for several hours a day, said the study to be published in the journal Medical Hypotheses.

"We would like to know how much cellphone use is normal, and where 'too much' starts," Montag added.

This potential new addiction is not an officially recognised disease but we know that using a cellphone can result in symptoms resembling an addiction, he pointed out.

"Outright withdrawal symptoms can actually occur when cellphones cannot be used," he warned.

Next on the agenda is to measure the severity and the progress of depression using cellphone data.

"We suspect that during a depressive phase, cellphone use will change in a measurable way," said researchers.

Patients would then make fewer phone calls and venture outside less frequently - a change in behaviour that smartphones can also record through built-in GPS.

A psychiatrist might then be able to use patients' cell phones as a diagnostic tool and, if necessary, intervene accordingly early on, the research said.

The new app is available as a free download from Google's Play Store.