MIB: The Men in Black 3 app is here 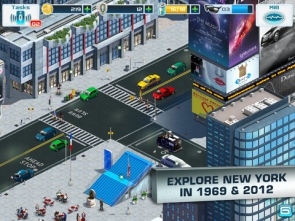 Highlights
Here come the Men in Black! Just in time for the release of Men in Black 3 movie, the third iteration in the MIB series. To add to the buzz, Gameloft in association with Sony Pictures has officially launched a free mobile game based on the anticipated blockbuster for the iOS and Android platforms.

The game is a bit different than you'd expect. It's more about resource management than it is about hardcore shooting or action adventure.

Set in New York city in two different time periods (past and present), you don the role of a young agent put in-charge of the MIB agency aided by Agent O, Agent K and Frank the Pug. Your mission is to protect the people of the city against the vile Radiant, an evil threat to mankind. The game employs real MIB weapons and gadgets such as the Neuralyzer, the Deatomizer, and the Noisy Cricket.

If you need help during a fight, you can always call upon one of the other agents to come to your rescue. The game also allows you to hire and deploy agents of your own on missions for which you need help. As you go on completing tasks, you're rewarded with coins, energy and T-pulse. XP points accumulated in the game allow you to unlock various items in the Market.

You can not only share your achievements via Twitter, Facebook and Gameloft Live but also call upon your social friends to help you on a mission.

Enjoy the launch trailer of Men in Black 3 accompanying the app's release that also reveals the console version of the game.