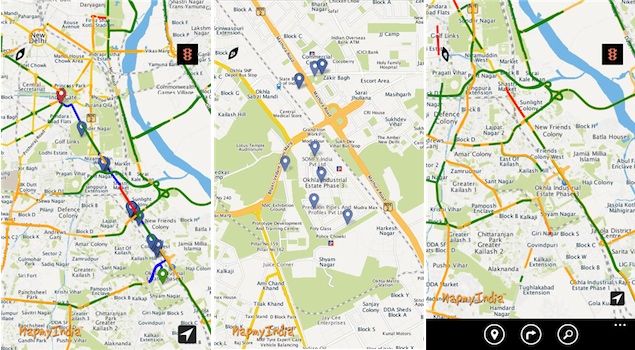 MapmyIndia claims that the service will deliver accurate, comprehensive and realtime traffic information, and allow users to look at traffic situation in real time and plan routes accordingly. The service can be accessed by updating the MapmyIndia app on respective devices.

As MediaNama notes, the service is available only in Delhi-NCR, Mumbai and Bangalore, but MapmyIndia intends to offer realtime traffic updates in other cities in the future.

The company informs that it will aggregate this data from a vast variety of sources, including an extensive network of probe data on ground. MapmyIndia says that it has tie-ups with various Government agencies for real time events or incidents based data.

Rakesh Verma, Managing Director, MapmyIndia said "Location is at the heart of everything we aim to do in MapmyIndia. Through the use of location-based technologies, MapmyIndia has been empowering consumers, enterprises and Governments in India, increasing productivity in the process. It's our constant endeavor to introduce new features such as live traffic updates on your phones, which will benefit Indian consumers tremendously as it has done for consumers in rest of the world. "

The MapmyIndia apps on Windows Phone, Windows 8 and Android offer maps that come with house number details, landmark-based driving directions with 'search for places of interest along the route' and 'search nearby' across a hundred categories of establishments.