Just days after making the overall messaging experience on its platform easier, LinkedIn has now brought voice messaging support to let you start using your voice to speak with your professional connections. The new support is initially rolling out in the LinkedIn app for Android and iOS devices. LinkedIn says that the new feature will be available globally in the "next few weeks." The previous update that was announced last week brought a new attachment icon, an ability to stretch the compose box, and the option to use @mentions to bring someone in a group or individual message. LinkedIn for iOS separately also added translations to posts available in the newsfeed.

"Whether you're responding while walking or multitasking, or need to give an in-depth explanation, voice messages let you more easily and quickly communicate in your own voice with your connections," said Zack Hendlin, Senior Product Manager, LinkedIn, in a blog post.

While voice messaging has already become an integral part of instant messaging apps including WhatsApp and WeChat and is useful more for informal communication, LinkedIn considers that voice messages can be an easy way for professionals as well. The Microsoft-owned company also highlights that it helps individuals speak in their own voices and "build a more personal connection and effectively communicate". Likewise, the company says that can often be better to leave a voice message for recipients than calling them. 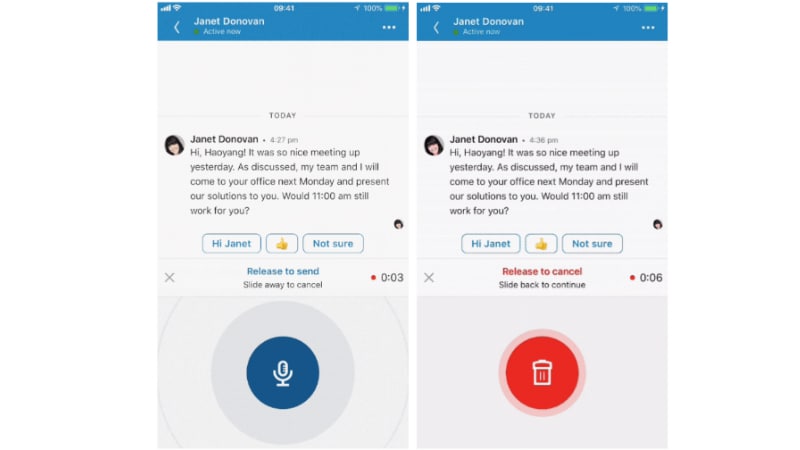 Having said that, some users consider that with the arrival of voice messaging on LinkedIn, marketers may start sending voicemails as well - just as spam messages. This means the next voice message you would receive might offer you a fresh job offer. But of course, this is not something that LinkedIn has apparently planned.

As we mentioned, voice messaging is rolling out within the LinkedIn app on Android and iOS. Voice messages can also be received on mobile devices as well as on the Web. Furthermore, the feature will be rolled out globally in the coming weeks.

Further reading: LinkedIn
Jagmeet Singh Email Jagmeet Jagmeet Singh writes about consumer technology for Gadgets 360, out of New Delhi. Jagmeet is a senior reporter for Gadgets 360, and has frequently written about apps, computer security, Internet services, and telecom developments. Jagmeet is available on Twitter at @JagmeetS13 or Email at jagmeets@ndtv.com. Please send in your leads and tips. More
Paytm's Tech to Power SoftBank's Mobile Payments Service in Japan