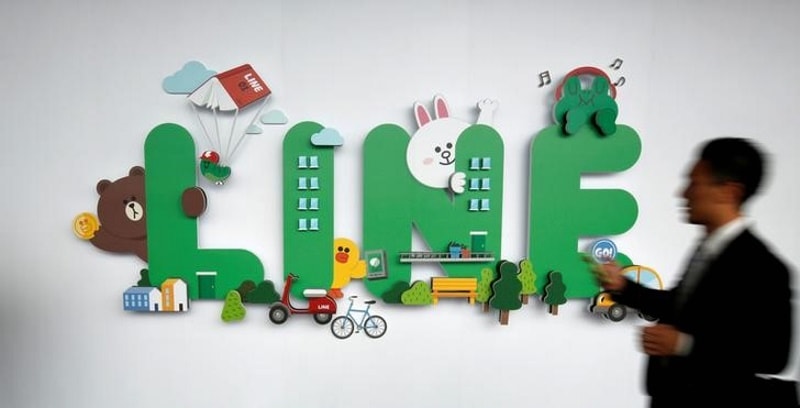 Japan's Line Corp said its number of monthly active users fell from the previous quarter, its first such decline, underscoring the messaging app operator's struggles to grow outside its home country since last year's high-profile IPO.

While Line's messaging app, known for electronic stickers of a brown bear and his rabbit girlfriend, is popular in Japan, Taiwan, Thailand and Indonesia, the company has lost out to rival apps in many other countries. More than two-thirds of revenue continues to come from the domestic market.

It said on Wednesday that monthly active user numbers for its main markets dropped to 169 million from 171 million, although first-half profit was boosted by an asset sale.

The decline in average monthly users was in Indonesia - its first-ever drop in that country, the company said, adding that users in Japan rose on the previous quarter.

Line has failed to maintain investor enthusiasm after it went public in the largest tech IPO of 2016, with its shares sliding sharply after earnings were released in each of the last three quarters. The stock has fallen 26 percent from its peak in late September, although it remains 17 percent above its IPO price.

Line's first-half operating profit surged 39 percent to JPY 18.6 billion ($166 million), double the average analyst forecast, after it booked JPY 10.4 billion from the sale of its stake in the operator of camera app Snow.

Line, which is controlled by South Korea's Naver Corp, did not provide a forecast for the current business year, citing a rapidly changing industry.

The company is moving to embed more of its services, such as payments and news, within the main messenger app as it seeks to capitalise on advertising opportunities and encourage users to think of Line as more than just a way to chat to friends.

It has also joined other tech firms including Amazon.com Inc and Google's Alphabet Inc in launching its own voice-activated speaker later in the year in Japan and South Korea, hoping to prompt more customers to subscribe to its broader suite of services such as Line Music.