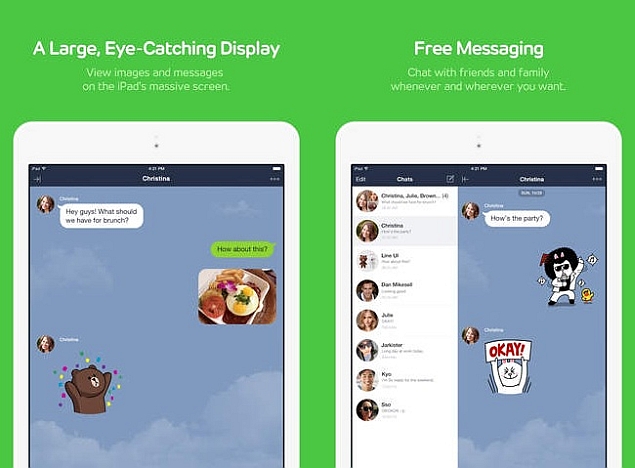 Line on Wednesday has launched a version of its app created especially for Apple iPad devices. Notably, a universal app compatible with both iPhone and iPad was already available for iOS users on the App Store.

The Line for iPad app, while featuring a tablet-optimised interface, misses out on certain features included in the Line universal app. Line for iPad app users will not be able to create new accounts using the app, and will have to create an account using the smartphone version of app. The app also skips the support for voice and video calling. Also missing is the Sticker Shop, and the Timeline feature.

The new Line for iPad app is sized at 27.9MB, and is compatible with iPad tablets running iOS 7.0 or later versions.

The messaging company in its recent Line Conference Tokyo 2014 event announced that it has 170 million monthly active users, from a total of 560 million users. Apart from its digital ventures, Line announced that it will be launching offline ventures in certain regions.

The company is planning a foray into the mobile payments business with Line Pay, which is scheduled to launch in "winter 2014". This will enable users to pay for different services using the Line app on iOS or Android. Line Pay will also let users split the cost through a feature called "Share Payment". Line Pay will support Touch ID on iPhone 5s, iPhone 6 and iPhone 6 Plus, apart from other forms of two-factor authentication on Android.